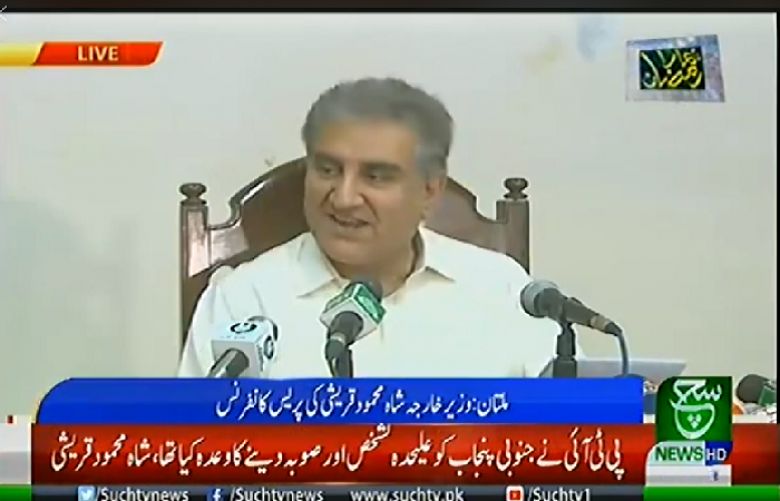 Addressing a news conference in Multan on Wednesday,Shah Mahmood Qureshi said the PTI has already introduced a Constitution Amendment in the National Assembly for this purpose and we require two thirds majority to pass this amendment.

The Foreign Minister said that he already had a positive sitting with Pakistan Peoples Party and consultations will be held with other parties including the PML (N) to convince them to support the Constitution Amendment.

The minister further said several members of the PML-N supported South Punjab province but there were others who were stuck on the bill they had presented in the past. “We will also speak to the PML-N and I will request them to review their decision and let South Punjab be formed.

They [PML-N] need to be practical as a province of three districts is not possible.”

For any constitutional amendment, two-thirds of the parliamentarians would have to vote in its favour. The national assembly, Pakistan’s lower house, has in total 342 seats, which means the Pakistan Tehreek-e-Insaf needs 228 votes to get its way.

The PML-N has 84 members and the PPP has 54 members in the parliament. So, in order to get the bill approved, the PTI would only need the support of the PPP, if the PML-N opts to stay out of the vote count. The PPP support will also be needed in the Senate where the party has an upper hand already before the bill becomes a law.

Highlighting salient features of the Constitution Amendment, the Foreign Minister said under this amendment, South Punjab will comprise of Multan, Bahawalpur and Dera Ghazi Khan Divisions.

The seats of South Punjab Assembly will be 120 keeping in view the population of these divisions.