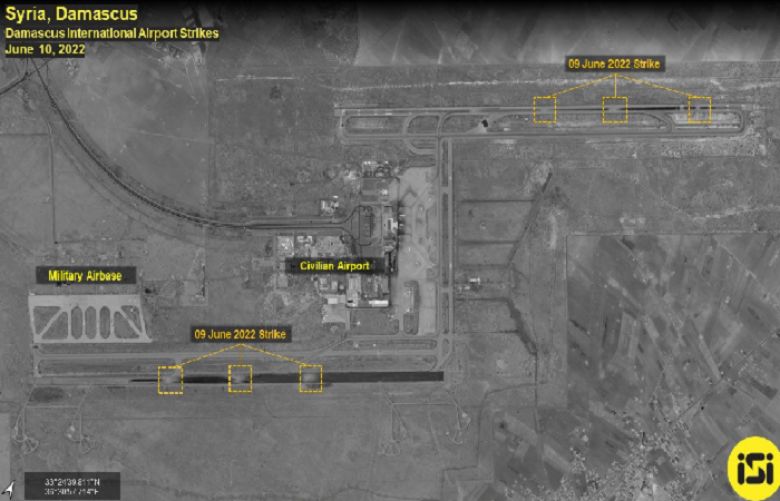 Syria has confirmed major damage including to runways at Damascus International Airport, which was closed for a second day on Saturday for repairs after Israeli air strikes.

The transport ministry said in a statement that runways were out of service.

Since civil war broke out in Syria in 2011, Israel has carried out hundreds of air strikes against its neighbour, targeting government troops as well as allied Iran-backed forces and fighters from Lebanon's Shia militant group Hezbollah.

But rarely have such attacks caused major flight disruptions.

“Civil aviation and national companies are working ... to repair the sizeable damage at the airport,” the ministry said, adding a terminal building was also hit.

The Syrian Observatory for Human Rights war monitor said the missile strike before dawn on Friday hit one of the runways as well as three arms depots near the airport belonging to Hezbollah, and other Iran-backed groups.

The Observatory, which relies on a network of sources within Syria, said the strikes wounded an undetermined number of people.

Satellite images posted on Twitter by the Israeli firm ISI showed three separate areas of what it said was “extensive damage to both military and civilian runways” caused by the strikes.

According to the Observatory, the damaged runway was the only one still operational after an Israeli strike last year put another one out of service.

The 2021 bombardment had targeted weapons shipments and arms depots operated by Iran-backed groups, said the Observatory, a Britain-based monitor.

The airport is in a region south of Damascus where Iran-backed groups, including Lebanon's Hezbollah, regularly operate.

The vicinity of the facility is favourite target for Israel which has launched 15 aerial attacks on Syria this year alone and regularly accuses Iran of using Damascus airport to send weapons shipments to its allies.

Syrian state media had reported that a volley of missiles was fired from the Israeli-occupied Golan Heights at around 4:20am on Friday.

A spokesperson for Russia's foreign ministry called such attacks “an absolutely unacceptable violation of international norms”.

Syria “will defend itself by all legitimate means” against Israeli attacks, Mekdad said.

While Israel rarely comments on individual strikes, it has acknowledged carrying out hundreds in Syria, in what the Jewish state's military says is necessary to prevent its arch foe Iran from gaining a foothold on its doorstep.

The conflict in Syria started with the brutal repression of peaceful protests and escalated to pull in foreign powers and global militants.

The war has killed nearly half a million people and forced around half of the country's pre-war population from their homes.