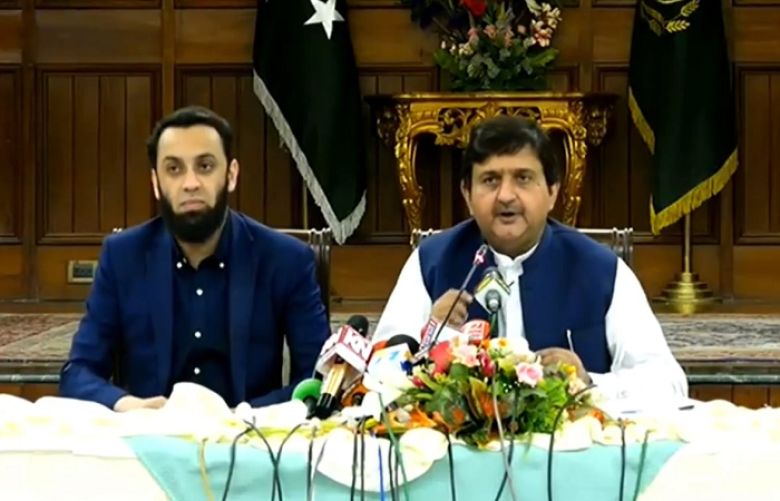 A red notice is an international request sent to the International Criminal Police Organization (Interpol) seeking the arrest and extradition of an individual.

Farah reportedly left the country following Imran's ouster from power. She has since been named in several cases that have been opened against her by investigators.

Just two days ago, the Punjab Anti-Corruption Establishment booked Farah and her mother and arrested two others in a case concerning the allegedly illegal allotment of two industrial plots, measuring 10 acres, to a company owned by her.

The plots were allotted on a subsidised rate offered by the government that was Rs83m but their market value was about Rs600m.

In April, NAB authorised an inquiry against her on allegations of accumulating "illegal assets beyond known sources of income, money laundering, and maintaining various accounts in the name of businesses".

Addressing a press conference in Lahore alongside Punjab Law Minister Malik Ahmed Khan, Tarar took aim at the former premier's wife and played an audio clip featuring an alleged conversation between Bushra Bibi and PTI's social media head Arsalan Khalid, in which the former issues instructions to the latter on labelling political opponents as "traitors".

PTI's Shahbaz Gill, in a press conference later, dismissed the audio as "fake", saying the "script" was written by fools.

Tarar said the Ministry of Interior had already been communicated with about the issuance of "red warrants".

He also said Farah had sent him a Rs6 billion legal notice, claiming her name was Farhat Shahzadi and she was wrongly referred to as "Gogi" by him during press talks.

He said Imran should call Farah back to the country if he had a firm belief that she was innocent. "I must say here that Imran is not bringing her back here because she and her husband will become approvers within an hour of their arrest," Tarar claimed.

The PML-N leader accused the former prime minister of committing corruption through Farah, who, he said, was responsible for all "dealings".

Tarar informed the journalists that Farah obtained an industrial plot in Faisalabad Special Economic Zone for Rs83 million against its market value of Rs600m. "Farah, her mother Bushra Khan and (Farah's husband) Ahsan Jamil Gujjar are involved in this deal."

He insisted that the case would not drag for long, saying "it is an open and shut case."

Tarar said a "troika" of Farah, her husband — and Bushra Bibi — would sit together after hours at the Prime Minister's House and "wheel and deal".

"Imran is not an ordinary man. His corruption stories are now surfacing and a lot more will be unearthed in the days to come," Tarar claimed.

He said those calling the former premier frugal and honest "must sit with him and talk about the industrial plot issue", which he said "cannot be justified in any form".