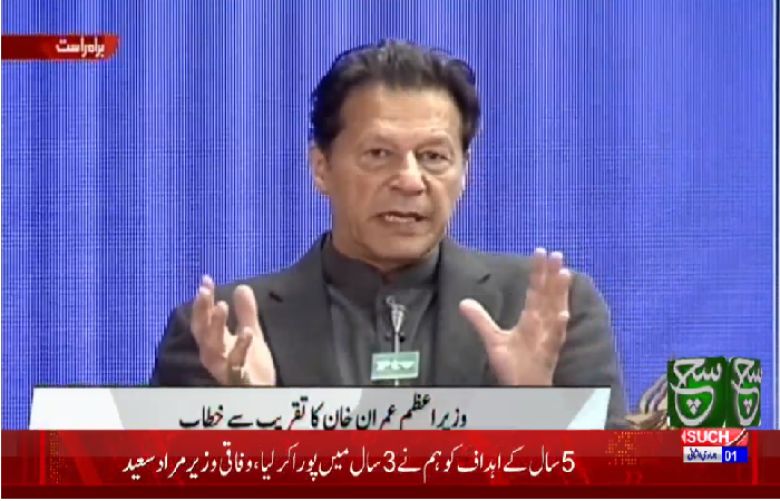 The 293 kilometres long Hakla-D.I. Khan Motorway, a key part of the western route of the China-Pakistan Economic Corridor (CPEC), "will benefit the less developed areas of the country", PM Imran Khan said while addressing the inauguration ceremony.

The premier commended the Ministry of Communications on the occasion, saying it has shown "tremendous performance" under Murad Saeed.

He said that, previously, the development of the country was confined only to GT Road, Lahore and onwards to Karachi, which was also called the eastern route of CPEC.
But a country achieves progress if there is uniform development across its length and breadth. It is made possible due to long-term planning like that done by China, which has planned 30 years ahead,” he added.

PM Imran Khan said future planning would envisage a roadmap for progress that embraces all parts of the country.

"If only a few areas are developed, the people living there will become rich and leave behind the population of backward areas in poverty. This is the biggest problem of the developing world," he said.

The prime minister said the Hakla-D.I. Khan Motorway would connect areas which are comparatively less developed.

A lack of facilities had forced the inhabitants of D.I. Khan and Minawali to move to developed cities, which also resulted in brain-drain and flight of talent, he said.

He expressed confidence that the motorway would go a long way towards raising the standards of living of these areas and reduce the travel time between Islamabad and D.I. Khan from seven hours to three.

A statement issued by the official Twitter handle of the Prime Minister's Office had announced the inauguration of the motorway earlier in the day.