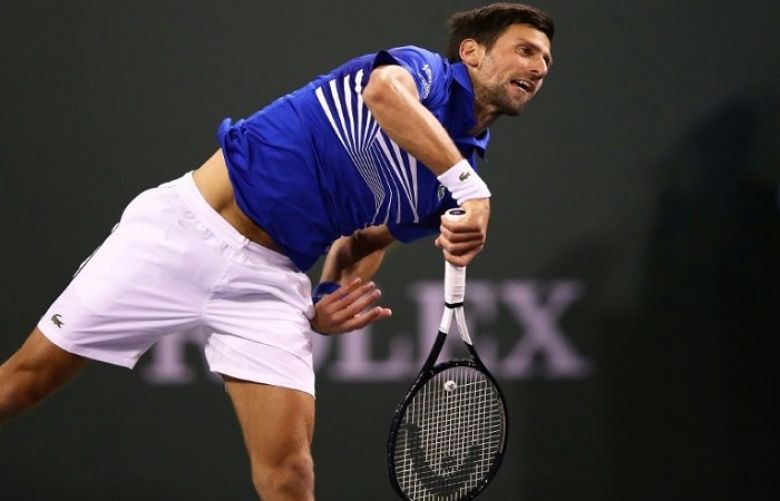 World number one Novak Djokovic shook off a nervy start to dispatch US qualifier Bjorn Fratangelo in straight sets Saturday to reach the third round of the ATP Indian Wells Masters.

Djokovic, playing his first match since winning a record seventh Australian Open title in January, was less than sharp in conceding an early break to his 128th-ranked rival.

He broke back as Fratangelo served for the set to knot it at 5-5, and then raced to a 4-1 lead in the tiebreaker.

Djokovic had to dig deep, however, when Fratangelo battled back to lead the tiebreaker 5-4.

After a double fault and a forehand error from the 25-year-old American, Djokovic suddenly had a set point, and once he'd pocketed the set, the second went all his way.

"To be honest, I was a bit nervous in the beginning," admitted Djokovic, who is going for a record sixth Indian Wells title.

"I didn't play my best. Credit to Bjorn for coming out firing from every corner.

"I was lucky to get the first set. After that, things went better for me," said Djokovic, who loped over to share a word with US great Pete Sampras in the stands after wrapping up the victory in one hour and 29 minutes.

Kyrgios, seeded 31st, was coming off a scintillating run to the Mexico Open title in Acapulco, where he defeated Nadal, ninth-ranked John Isner and, in the final, third-ranked German Alexander Zverev.

Kyrgios said it wasn't a matter of an emotional let-down in the wake of his first title in over a year.

"I didn't really have a problem getting up. I just didn't play well today," he said.

"He's an incredible competitor," Kyrgios said. "He knows how to win tennis matches."

As men's seeds swung into action after first-round byes, third-seeded Zverev advanced when Slovakian foe Martin Klizan retired with an ankle injury with the German leading 6-3, 2-0.

Action opened on stadium court with 18-year-old Canadian Felix Auger-Aliassime powering past Greece's Stefanos Tsitsipas, 6-4, 6-2, for his first win over a top-10 player.

He moved into the top 10 for the first time with his runner-up finish to Federer in Dubai, where the Swiss great claimed a remarkable 100th career title.

But Tsitsipas could find no answer to Auger-Aliassime, who broke early in the first to gain the upper hand and seized a 2-1 lead with the first of two breaks in the second.

Auger-Aliassime saved all seven break points he faced -- six of them in the first set.

"It's unbelievable," Auger-Aliassime said. "I never expected to play that well today, to get my first top-10 win is special, against Stefanos who has been playing so well."

Auger-Aliassime, who next faces Japan's Yoshihito Nishioka, is one of four teens in the draw, along with countryman Denis Shapovalov, Alexei Popyrin and lucky loser Miomir Kecmanovic.

Kecmanovic gained entry into the second round in place of injured fifth-seed Kevin Anderson.

He made the most of his chance, beating Germany's Maximilian Marterer, 6-3, 6-2, to reach the third round.