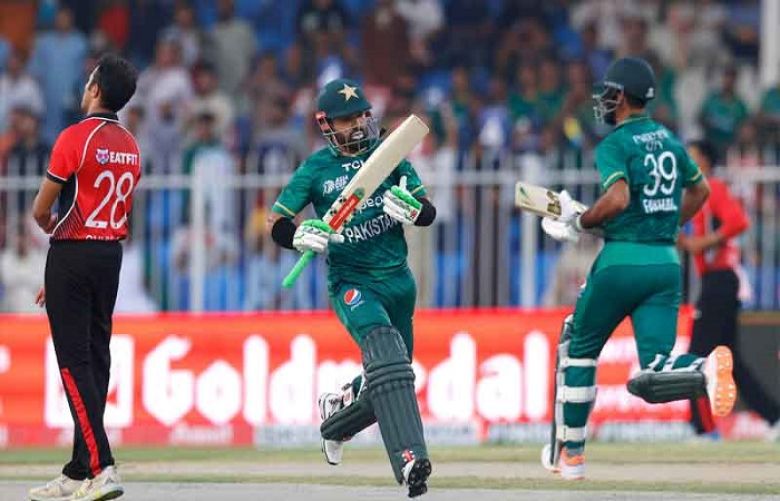 Pakistan have stormed into the Asia Cup Super Four as they registered a massive 155-run victory against Hong Kong on Friday in Sharjah.

The Men in Green will now face India on Sunday at Dubai International Stadium in the Super Four.

Spinners, Shadab Khan and Mohammad Nawaz, did the major damage with the bowl, as they shared seven wickets between them.

Pakistan vice-captain Shadab ended up with the figures of four for eight in his 2.4 overs, while Nawaz bagged three wickets and just conceded five runs from his two overs.

Pacer Naseem Shah started the proceeding as he removed captain Nizakat Khan and Babar Hayat in his second over.

Shahnawaz Dhahni also claimed his first wicket of the tournament, when he removed Yasim Murtaza.

No Hong Kong batter managed to score in the double figures. This was Pakistan’s biggest win in T20I history in terms of margin.

Earlier, Mohammad Rizwan’s unbeaten 78 and a late blitz by Khushdil Shah steered Pakistan to a challenging 193-2 against minnows Hong Kong in a do-or-die clash.

Rizwan and Fakhar Zaman (53) put on a key stand of 116 after Pakistan lost skipper Babar Azam for nine in a match which will decide the final Super Four berth of the six-nation tournament.

Khushdil hit five sixes including four in the final over to finish with a flourish in his unbeaten 35 off 15 balls as Rizwan watched the blitz from the non-striker’s end in a partnership of 64.

The loser of the contest will go out of the tournament, which acts as a tune-up to the T20 World Cup in October-November in Australia.

Bowlers kept the Pakistan openers under check with a disciplined line and length and spinner Ehsan Khan got the key wicket of skipper Babar Azam for nine in the third over.

Azam hit a boundary off Ehsan’s off spin but the bowler soon got revenge with a caught and bowled to silence a largely Pakistan crowd.

The left-handed Fakhar Zaman joined Rizwan, a wicketkeeper-batsman, and the two attempted to rebuild, hitting a few boundaries between them to improve the scoring rate.

Spinners Yasim Murtaza and Mohammad Ghazanfar kept the batsmen restricted to singles and twos on a slow and low pitch until Rizwan broke the shackles with a straight six.

Rizwan kept chipping away and got his fifty off 42 balls to raise the bat amid raucous applause form the crowd.

Fakhar also changed gears and reached his fifty with a towering six off Murtaza’s left-arm spin, but got out next over to Ehsan after his 41-ball stay.

Khushdil then tore into the opposition bowling and ended the innings with three successive sixes.

Afghanistan, Sri Lanka – both from Group B – and India (Group A) have already made the Super Four.