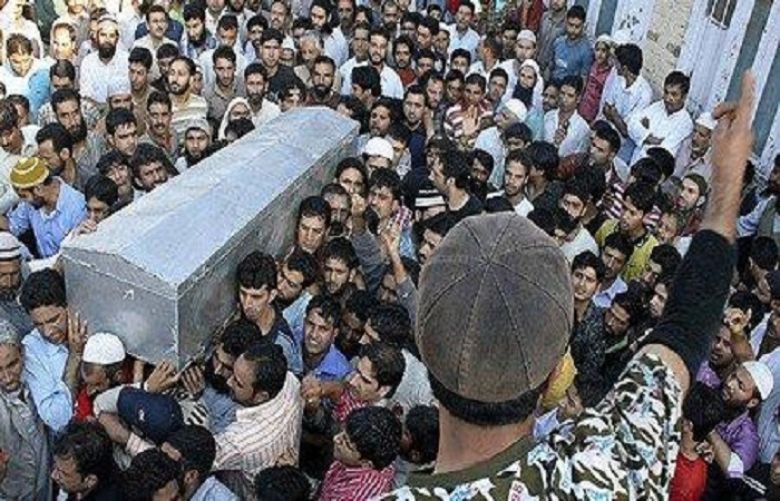 Pakistan on Wednesday strongly condemned the continued spree of extra-judicial killings in staged encounters and fake cordon-and-search-operations in occupied Jammu and Kashmir by Indian forces who, in the latest such incident, killed two Kashmiris in Pulwama.

According to a statement by the Ministry of Foreign Affairs, the two Kashmiris were killed in a so-called cordon-and-search-operation today.

The ministry said that at least 18 innocent Kashmiris have been killed with impunity by Indian occupation forces in the past month.

The statement notes that while the fundamental freedoms of Kashmiris remain suspended, Indian occupation forces have "further intensified their repression" in Indian-occupied Jammu and Kashmir in the past weeks.

Furthermore, the ministry said that extra-judicial killings, arbitrary arrests, incarceration of hundreds of common Kashmiris and Hurriyat leaders under the draconian laws and harassment of Kashmiris at the military check-points or during the night raids continue with impunity.

The statement said that hateful terms such as "hybrid terrorists" and "white collar terrorists" are used to further demonise them.

"The deteriorating security and human rights situation in the occupied territory is a matter of grave concern for the international community," stated the ministry.

The statement further said that the visit by Indian ministers, amidst all this, to the occupied territory is "another Indian ploy to divert attention from India’s state-sponsored terrorism and to project a false sense of normalcy” in Indian-occupied Jammu and Kashmir.

"No amount of lies, deceit and publicity stunts by the RSS-BJP votaries in the name of fake ‘normalcy’ and development, can mask, address or remove the total alienation of the Kashmiris in [Indian-occupied Jammu and Kashmir]," said the ministry.

It said that India must recognise that the only way for the region to achieve long-term peace and development is for the Jammu and Kashmir dispute to be permanently resolved in accordance with UN Security Council resolutions and the demands of the Kashmiri people.