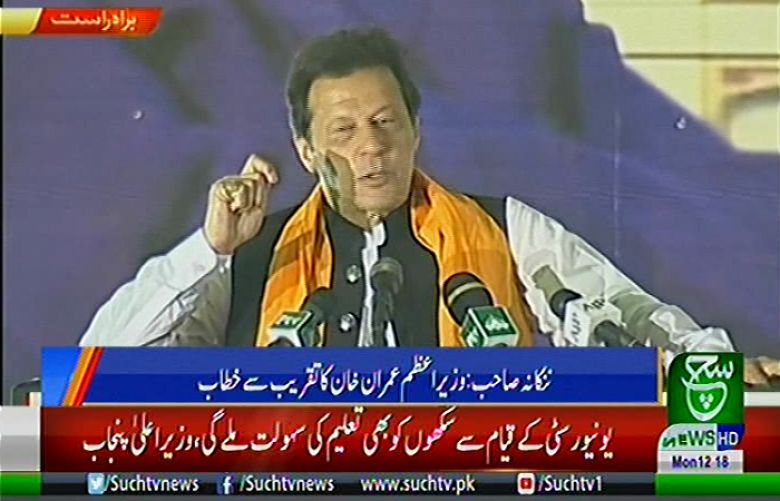 Prime Minister Imran Khan has regretted the purpose of protest March is to create hindrance in the implementation of government's policies which have started delivering positive results.

Addressing a ceremony in connection with the ground breaking of Baba Guru Nanak University in Nankana Sahib today, he said the organizers of March are scared of the successes of the government on the economic front.

Terming the protest March as a blackmailing tactic, the Prime Minister categorically stated that no NRO will be given to the corrupt elements no matter they hold the march or resort to any other blackmailing.

The Prime Minister said the first year was difficult for the PTI government but now the country is rapidly moving forward as a result of our policies.

He said that world institutions such as the World Bank and the Asian Development Bank are acknowledging the reforms agenda of the govenrment and the economic stability achieved by the country.

He said our efforts for ease of doing business have also been acknowledged by the World Bank which has put Pakistan the top performer in the sub-continent and on the sixth position in the world.

He said the world is now expressing interest to invest in Pakistan due to steps taken by the government for ease of doing business.

On the indisposition of PML (N) Quaid Nawaz Sharif, the Prime Minsiter said the federal and provincial governments made their utmost efforts to provide the best medical care to Nawaz Sharif.

He said the State of Madina was the most successful model as its foundation was laid amongst others on the principle of rule of law. He said we will also ensure rule of law and equal applicability of law for all irrespective of their stature in the society.

Turning to the uplift of the education sector, the Prime Minister assured to provide maximum resources for promotion of education. He said the government has decided to construct educational institutions on the land of Auqaf. We will make Pakistan a knowledge economy.

Highlighting the siginicance of Kartarpur for Sikh Community, the Prime Minister said the Kartarpur corridor should remain open regardless of the worsening tension with neighboring India. He said we will give passage to the Sikh community to visit their sacred places.

Imran Khan also expressed the commitment to mainstream the religious seminaries and equip their students with the contemporary education. Abhorring the class based education system, he said a single uniform system and curricula will be introduced to promote harmony and unity in the country.