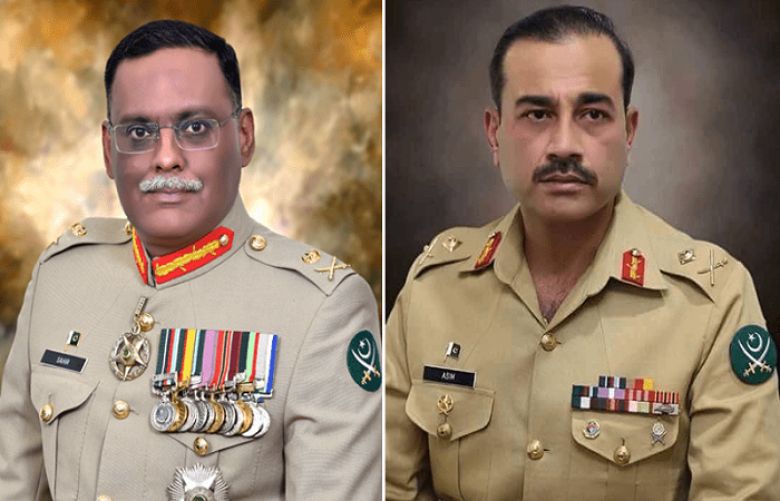 Uncertainty surrounding key appointments in the military ended after President Arif Alvi on Thursday signed the summary and approved the appointment of Lieutenant General Asim Munir as the next chief of army staff and Lt Gen Sahir Shamshad Mirza as chairman of the Joint Chiefs of Staff Committee (CJCSC).

The decision was announced after PM Shehbaz held a federal cabinet meeting earlier today to mull over the high-profile appointments after the allied parties authorised him to pick the officers for the top slots.

PM Shehbaz's nominee for the army chief has also been retained by the federal government under the Pakistan Army Act, according to sources, as he was about to retire later this month.

Following the PM’s decision, the summary for the new appointments was sent to the President's Secretariat.

All eyes were on the meeting as Imran Khan, in an interview Wednesday night, had said that he and President Alvi would play “legally and constitutionally” on the matter.

Lt Gen Munir, who was also Pakistan's chief spy, will take over from outgoing COAS General Qamar Javed Bajwa, who retires later this month after a six-year term.

COAS Gen Bajwa, who was appointed as the army chief in 2016, will retire on November 29. He was initially set to hang up his boots in 2019, but the PTI-led government gave him a three-year extension.

Who is Lt Gen Asim Munir?

Lt Gen Asim Munir joined the Pakistan Army from the Mangala Officers Training School programme and then became a commissioned officer in the Frontier Force Regiment.

Following this, he was posted as Corps Commander Gujranwala for two years. Currently, he is serving as the Quarter Master at the General Headquarters (GHQ).

Lt Gen Sahir Shamshad Mirza hails from the Sindh Regiment and served as the director-general of the military operations under former COAS Raheel Sharif.

Lt Gen Mirza also supervised the operations against terrorists in North Waziristan and was part of the coordination group that oversaw negotiations with Afghanistan.

He was also a member of the Gilgit-Baltistan Reforms Committee. After becoming a Lt Gen, Mirza was appointed as the Chief of the General Staff. Currently, he is serving as the Corps Commander Rawalpindi.