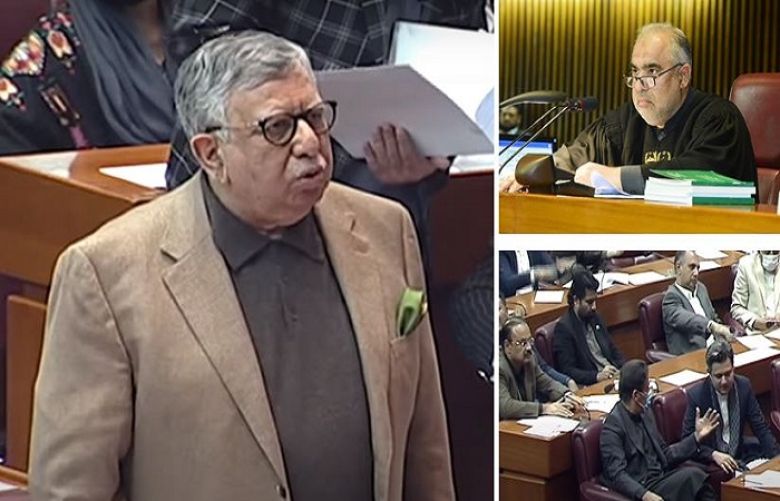 The National Assembly on Thursday passed the State Bank of Pakistan (Amendment) Bill 2021 and supplementary finance bill — termed by the Opposition as a "mini-budget" — with a majority vote giving effect to new tax measures in an ambitious bid to achieve a tax target of Rs5.8 trillion as per the requirement of the International Monetary Fund (IMF).

The approval of the supplementary finance bill was necessary to ensure Pakistan’s sixth review of the $6 billion Extended Fund Facility (EFE) gets cleared by the IMF’s Executive Board which is scheduled to meet later this month to decide the disbursement of the $1-billion tranche.

Days after Federal Minister for Finance Shaukat Tarin introduced two bills in the assembly to give effect to the Rs343 billion mini-budget and granted autonomy to the central bank, the NA approved the finance bill amid a ruckus created by the Opposition during a prolonged session.

It is pertinent to mention here that on Tuesday, the NA had formally begun a general debate on the mini-budget which saw the coalition partners in the ruling alliance under the PTI joining their voices with the Opposition over possible implications of the new taxation measures.

In the amended bill, the government rolled back its plan to impose additional sales taxes on children’s formula milk, bread, and small cars. It also withdrew the proposal to impose taxes on laptops and computers.

Changes to the bill

The government's amendments to the proposed bill were approved by the NA. The changes include:

No general sales tax will be imposed on a 200-gram carton of milk.

Tax on imported vehicles has been increased from 5% to 12.5%.

The federal excise duty on all imported vehicles will remain unchanged.

A 2.5% duty will be charged on locally manufactured 1,300 cc vehicles, which was previously around 5%.

A 10% duty will be imposed on locally manufactured cars greater than 2,100 cc.

No sales tax will be imposed on iodised salt and red chillies.

Proceedings of the session

The Opposition's amendments to the bill were rejected and when the voting took place, 150 members voted in favour of the amendments, while 168 voted against them.

By this measure, the government had an edge with 18 parliamentarians to get the bill passed.

The National Assembly comprises 342 lawmakers, of which the government has 182 MNAs, while the Opposition has 160 MNAs.

In today's session, 14 of the government's lawmakers were absent, while 10 from the Opposition's side didn't show up.

Shedding light on the criticism regarding the supplementary bill being the “IMF bill”, Tarin said that during the previous government’s tenure, 13 agreements were signed with the Fund.

“They [the Opposition] are saying that IMF has destroyed the economy of Pakistan, while they went to the IMF in their tenures as well,” he said.

Tarin further said that the PTI government is being accused of "mortgaging country's sovereignty”; however, the government was forced to approach the IMF.

“We had no other option but to ask for IMF’s help,” he reiterated.

Addressing the finance minister, PPP Chairman Bilawal Bhutto-Zardari said that the finance minister is continuously asking why is the Opposition protesting, "so let us tell him that if the government is going to ignore the voice of a common man, we are going to highlight the issues.”

PPP leader said: “We know the address of your Karachi’s residence,” adding that "go and ask people why are they upset."

“If you will not go to people, we will bring people to you,” he said, reiterating that he knows Tarin's address.

Referring to the strict conditions imposed by the IMF, Bilawal said that if the government is serious about Pakistan, they should reject the “IMF budget.”

“We will bring Pakistanis out of this economic situation,” he asserted.

Addressing the House, Tarin further said that the supplementary finance bill is a step towards the “process of documentation.”

Addressing the allegations of the Opposition that the mini-budget will bring a tsunami of inflation in the country, the finance minister said that out of Rs343 billion taxes worth Rs280 will be refunded “then what is the issue?”

“This is not a game of money,” he reiterated.

The minister underlined that the government has decided to withdraw its proposal to impose additional sales taxes on children’s formula milk, bread, laptops etc.

Tarin said that the country cannot achieve its target of 6-8% growth until the tax-to-GDP ratio is around 18-20%.

“Opposition’s protest against the supplementary finance bill is baseless,” Tarin said, adding that this will help in the documentation which will in return highlight the actual income of people.

Former prime minister and PML-N stalwart Shahid Khaqan Abbasi addressed the House to say: "Kindly let it be known in the Parliament why there was a need to present the mini-budget?"

"Why are you placing such a heavy additional burden of taxes on the masses?"

Abbasi proposed that "instead of announcing what will get more expensive, why not tell us what will not"?

He said fuel costs have risen as well as power costs.

"This budget had become a bane for the section of society that MQM represents," she said, adding that the MQM had called attention to this.

"I have incorporated the amendments, so the MNA must withdraw these," Tarin said.

Tarin convinced Zehra to withdraw her amendments after which she agreed to do so.

Bilawal's amendments consisted of a withdrawal of taxes from naan and other tandoor-based and baked goods, as well as restaurants. He also sought an amendment whereby imports of multimedia goods and laptops not be taxed.

After the amendments were rejected, the bill was presented for approval at the Parliament.

The speaker instructed the copies of the amended bill to be circulated among the assembly members.

Meanwhile, PML-N Secretary-General Ahsan Iqbal continued to voice his opposition to the way voting had been carried out, demanding a recount, under Rule 276.

He argued there must be a recount when the Opposition demands it.

At this, the speaker said he used his powers under Rule 29 (residuary powers of the speaker) of the rules of procedure, which states: "All matters not specifically provided for in these rules and all questions relating to the detailed working of these rules shall be regulated in such manner as the Speaker may, from time to time, direct."

Iqbal said that the speaker does not have room for his own reasoning in a matter. "You will have to do a recount, whenever demanded."

PML-N lawmaker and former speaker of the National Assembly Ayaz Sadiq said that there are clear rules as well as parliamentary traditions when it comes to voting.

"The speaker must not listen to the secretariat staff on voting," he said.

"You are insulting Parliament," Sadiq said, adding that when he was speaker, whenever the PPP asked for a recount, he would allow it.

Iqbal claimed that government lawmakers have left, which is why the speaker was not conducting a recount.

"This may be your opinion. I have respect for the laws," Qaiser said.

Later, Advisor to the PM on Parliamentary Affairs Babar Awan stood up to say that counting had taken place "twice" and that the speaker's ruling is "correct".

Earlier this week, the Senate approved the recommendations on the Finance (Supplementary) Bill 2021.

Presenting the final report related to the bill, Standing Committee on Finance Chairman Senator Muhammad Talha Mahmood had highlighted that the Opposition did not raise any objections to the bill.

Terming the "mini-budget" an “IMF budget”, Mahmood said that the supplementary finance bill will bring a tsunami of inflation in the country.

He added that this is not just an Rs343 billion budget it is far more than that, adding that the finance bill will have a "negative impact on the common man.

On December 30, Federal Minister for Finance Shaukat Tarin presented the much-awaited supplementary finance bill — termed by the Opposition as a "mini-budget" — in the National Assembly.

According to the finance ministry's proposal, the government will impose a tax on approximately 150 goods at a rate of 17%. Therefore, goods that were currently either completely exempt from General Sales Tax (GST) or being taxed at 5% to 12% rates would now be taxed at 17%.