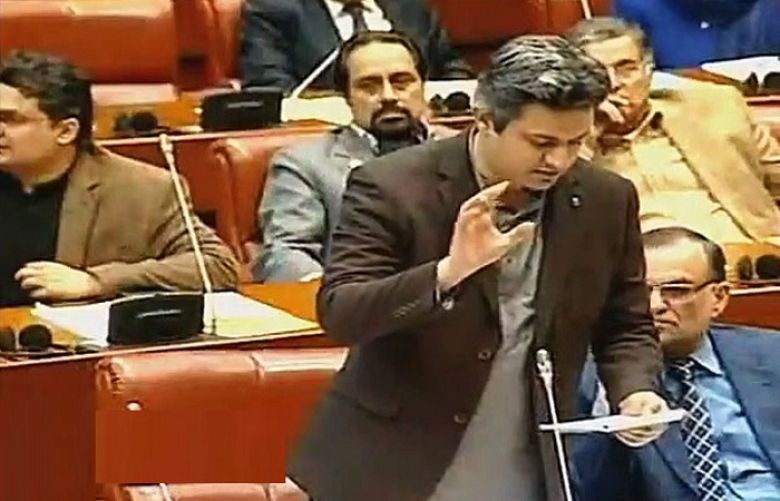 File Photo Four billion does not come out of our leader's account: Hamad Azhar

Federal Minister for Energy Hammad Azhar said that government has saved country from bankruptcy and placed economy back on the track.

Addressing a National Assembly session, Hammad Azhar said that Pakistan Tehreek-e-Insaf (PTI) government paid back record amount of loans and took difficult decisions to correct the direction of the economy.

He said that country was nearing bankruptcy when PML-N left the government but PTI shunned their policies and took decisions that led to growth in the country.

The minister asserted that yield of crops has increased compared to tenure of PML-N as highest sale of urea was recorded in 2021 which led to shortage of the fertilizer.

Talking about inflation in the country, Energy Minister said that increase in the commodity prices was due to supply chain problems because of coronavirus pandemic.

Hammad Azhar said there has been growth of 25 to 30 percent in exports which will touch thirty billion dollars by the close of this financial year.

The Minister for Energy said the government is fully cognizant of the problems faced by the people due to inflation. He said that the government disbursed about 200 billion rupees amongst millions of deserving families under Ehsaas program in the wake of COVID-19. He said we are also providing the people with Insaaf Sehat Card under which each household is entitled to medical treatment worth one million rupees. He said the international community is appreciating Pakistan for successfully tackling the Covid pandemic.

Earlier, Pakistan Peoples Party (PPP) Chairman Bilawal Bhutto Zardari on said that the nation has never witnessed before such a worst economic condition of the country.

Addressing the members in National Assembly (NA), the PPP leader said the government PTI signed a weak deal with International Monetary Fund (IMF), adding that the general masses are bearing the after effects of this agreement.

Prime Minister Imran Khan is preparing to increase the prices of basic commodities. The meaning of new Pakistan is only unemployment, inflation and poverty. This is not change but devastation, he stated.

Bilawal Bhutto alleged the incumbent government of destroying agriculture sector and farmers by creating urea crisis. The ministers took ineffective decisions because of their stubbornness and ego, he expressed.

The PPP leader said that the government had rejected the offer of Opposition Leader in NA Shehbaz Sharif regarding National Economic Dialogue. The ministers were adamant over not talking to opposition on any issue. You could have presented the stance of opposition before IMF, he stated.

Bilawal Bhutto further asserted that the mini budget will hike the prices of 1000cc cars by 100 percent. The party of ‘Twitter and Facebook’ has also imposed new taxes on Information Technology (IT) sector and aid money, he went on to say.

The PPP chief asked when will PM stop selling his lies and think about the people. He demanded the federation to raise the salaries of government employees by 100percent, adding that Sindh authorities have set Rs25000 as minimum wage to provide relief to the nation.

He further said that agriculture sector suffered a lot over unequal distribution of water. PM said that coronavirus is major crisis of this century but it’s not true. He [Imran Khan] is actually the biggest crisis in Pakistan, he reiterated.

Talking about new initiatives of PTI government, Bilawal said that health card will badly affect health sector of the country. The federation is misusing resources in the name of health cards. We need to raise the standard of hospitals, he stated.