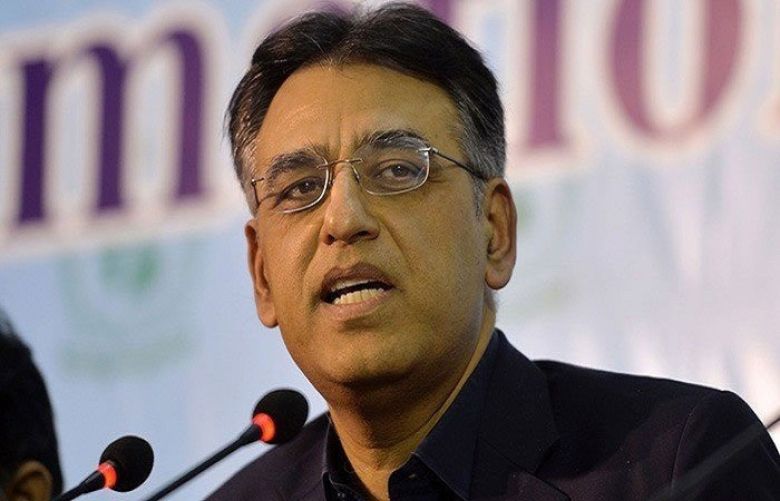 His remarks, during a press conference in the city, follow the provincial government bulldozing amendments to the Sindh Local Government (Amendment) Bill, 2021 last month.

The bill had earlier been passed by the Sindh Assembly the month prior but was sent back by the governor who did not approve of it.

But then in a subsequent session, the treasury passed the amended bill as the Opposition staged a walkout.

Umar in his address said that the local government law in Sindh is "unconstitutional" and "incomplete democracy".

He said that the federal government has filed a petition against the bill, adding that the provincial government "seeks to endanger Pakistan".

The minister said that the 18th Amendment to the Constitution had greatly enhanced powers of all the provinces.

He noted that PPP Chairman Bilawal Bhutto Zardari's sister had remarked earlier that the province is barred from buying vaccinations under the law.

"What law is it that prevents the Sindh government from buying vaccines for its citizens?" Umar asked.

"If there is such a law, let us know and we will change it," he added.

The minister said that the Centre wants all provinces to "fulfil their responsibilities".

Speaking of the production and distribution of wheat in Sindh, he said that investigations by the National Accountability Bureau show Rs20 billion worth of theft of the crop.

"And they say that rats ate it up," the minister said, adding: "I don't know if these were human rats or what."

He went on to say that in Sindh the price of wheat flour is higher than that in Punjab.

Umar, who is also the chairman of the National Command and Operation Centre that leads Pakistan's fight against coronavirus, noted that due to the new variant, Omicron, there are "clear signs of the possibility of another coronavirus wave".

He said that he never does any politicking and does not "discriminate against any province" when it comes to the virus.

The NCOC chief said that the government has vaccinated 71.5 million people for which it spent Rs250 billion, despite the "difficult circumstances".

In a message on Twitter earlier in the day, Umar had stressed on the use of masks amid the expected new COVID wave, saying it is "your best protection".

Reacting to Umar's press conference, Minister for Information Sindh Saeed Ghani said that it was a PPP minister who first noted that wheat theft had occurred.

"It was the Sindh government that wrote to NAB, asking to investigate," he said.

Ghani went on to allege that wheat theft "took place in the tenure of an individual for whom Imran Khan was chief polling agent".

"The Sindh government caught all those rats involved in the theft of wheat," he added.

The provincial information minister said that "one rat ate up Rs40 billion from the corona fund", and the same rat "stole Rs600 billion of the nation's wealth during the purchase of LNG".

"Other rats caused a sugar and wheat shortage in the country," Ghani said.