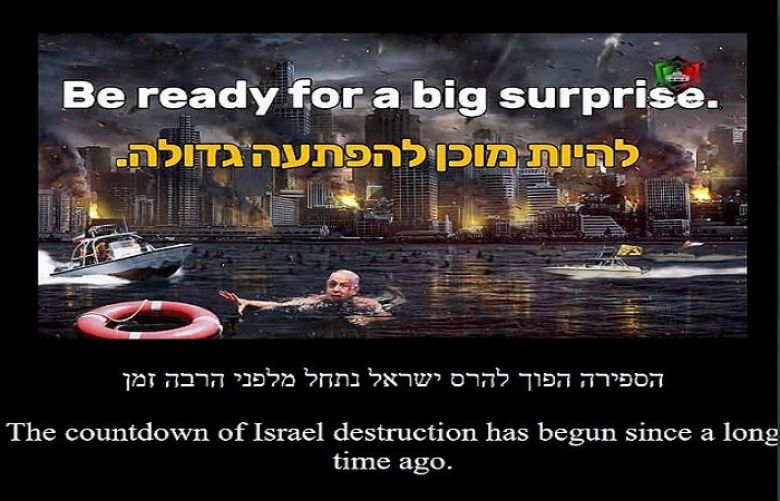 Many Israeli websites were hit by a coordinated cyberattack Thursday, with the home pages replaced by images of the country’s commercial capital Tel Aviv in flames.

It did not state the number of pages targeted but Israeli media reported it was more than 1,000, including those of major firms.

The pages were replaced with the slogan 'the countdown to the destruction of Israel started long ago'.

A link led to a computer-generated video of Tel Aviv and other Israeli cities on fire, seemingly after a series of attacks.

The image also showed a photoshopped picture of Israeli Prime Minister Benjamin Netanyahu swimming from the burning city to safety.

There were no immediate details on the group which claimed the attack called Hackers of Saviour, who also changed the page titles to 'Be ready for a big surprise,' along with the message: 'The countdown of Israel destruction has begun since a long time ago.

The attack came a day before Israelis celebrate Jerusalem Day -- signifying the country’s capture of the eastern part of the disputed city in 1967.

Iran and Israel have flared in a war of words on Twitter.

The Zionist regime is the most evident example of state terrorism. Ever since Britain’s anti-Islamic, antihuman policies put the Zionists to rule in #Palestine, they have been acting like a cancerous tumor, furthering their goals by massacring children, women and men.#FlyTheFlag

Israeli Prime Minister Benjamin Netanyahu replied Wednesday evening, saying Khamenei “should know that any regime that threatens Israel with extermination will find itself in similar danger.”

The attack on Israeli websites came days after a cyber-attack on computer systems at an Iranian port was blamed on Israel.