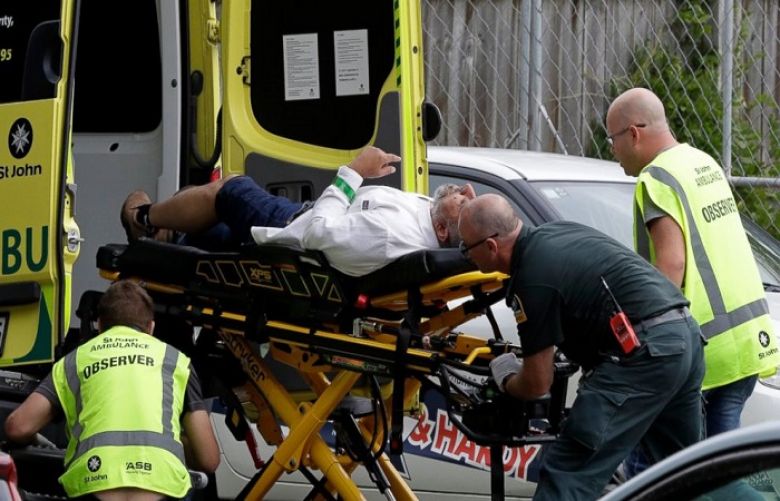 Reuters Many dead in New Zealand shooting at two mosques

He added that a man had been charged with murder in connection with the terrorist attack and will be produced before court on Saturday. Bush was speaking to the media for the second time after the attack.

“One person, a male in his late 20s, has been charged with murder, and should appear in the Christchurch Court tomorrow morning,” he said.

Earlier, New Zealand's Prime Minister Jacinda Ardern had said that 40 people had been killed while 20 were injured in the deadly attack and called it one of the country's "darkest days”.

This can "only be described as a terrorist attack", she said in a second press conference following the shootings in New Zealand's city of Christchurch, adding that the national security level has been changed from low to "high".

"From what we know, it does appear to have been well planned," she said. "Two explosive devices attached to suspect vehicles have now been found and they have been disarmed."

She confirmed that four people, one of whom is an Australian, had been detained but said that none of them was on a terror watch list. The prime minister, however, said that she could not "give specifics about who was directly involved at each mosque".

Ardern said the country was attacked because New Zealand "represents diversity". She added that she planned to "get to Christchurch as early as I can".

She also urged people not to share the video of the attack as well as the manifesto of the alleged shooter and added that websites, where pictures and videos had been shared, were working on taking them down.

"My message would be we should not be perpetuating, sharing, giving any oxygen to this act of violence and the message that’s set behind it."

Authorities detained four people and defused explosive devices in what appeared to be a carefully planned attack.

Police took three men and a woman into custody after the shootings, which shocked people across the nation of 5 million people. Authorities have not elaborated on who they detained. But a man who claimed responsibility for the shootings left a 74-page anti-immigrant manifesto in which he explained who he was and his reasoning for his actions.

The man who claimed responsibility for the shooting identified himself as Brenton Tarrant and said he was 28-year-old white Australian who came to New Zealand only to plan and train for the attack. He said he was not a member of any organisation, but had donated to and interacted with many nationalist groups, though he acted alone and no group ordered the attack.

He said that the mosques in Christchurch and Linwood would be the targets, as would a third mosque in the town of Ashburton if he could make it there. He said he chose New Zealand because of its location, to show that even the most remote parts of the world were not free of "mass immigration". New Zealand is generally considered to be a welcoming country for immigrants and refugees.

Australia's Prime Minister Scott Morrison confirmed that an Australian citizen had been arrested in connection with New Zealand's mosque shootings.

"It does not get more serious than this," said Police Commissioner Mike Bush. He did not provide any details regarding the situation but warned against assuming that the danger had passed.

"We are not aware of other people, but we cannot assume there are not others at large," he told the press.

The South Island city was placed in lockdown as police hunted for an “active shooter".

Unconfirmed reports said the shooter was wearing military-style clothing. According to the BBC, an unverified video has emerged on social media that was reportedly recorded by the attacker during the shooting.

The mosques — Masjid al Noor in central Christchurch and the other one in suburban Linwood — were packed with worshippers, and members of the Bangladesh cricket team were arriving when the shooter opened fire.

Police urged people to stay indoors and not to visit mosques "anywhere in New Zealand" as they tried to determine if more than one gunman was involved.

The police, in a tweet, also asked citizens not to share the "extremely distressing footage" that was "circulating online".

A Palestinian man in the mosque, who did not want to give his name, said he saw a man shot in the head.

"I heard three quick shots then after about 10 seconds it started again it must have been an automatic no one could pull a trigger that quick," he told AFP.

"Then people started running out. Some were covered in blood."

Police Commissioner Mike Bush said he could not confirm how many casualties have taken place but the local media placed the death toll at 27.

Prime Minister Ardern described the incident as an "unprecedented act of violence".

"I would describe it as an unprecedented act of violence. An act that has absolutely no place in New Zealand. This is not who we are," she said in a press conference.

"It I can tell you now this is and will be one of New Zealand's darkest days."

Ardern confirmed that one person had been taken under custody. She alluded to anti-immigrant sentiment as the possible motive, saying that while many people affected by the shootings may be migrants or refugees “they have chosen to make New Zealand their home, and it is their home. They are us. The person who has perpetuated this violence against us is not”.

One witness told stuff.co.nz he was praying in the Deans Ave mosque when he heard shooting and saw his wife lying dead on the footpath outside when he fled. Another man said he saw children being shot.

“There were bodies all over me,” he said.

Local media said another mosque had been evacuated.

An eyewitness told Radio New Zealand he heard shots fired and four people were lying on the ground, with “blood everywhere”.

Police commissioner Mike Bush said all schools in the city had been placed in lockdown in response to “a serious ongoing firearms incident”.

“Police urge anyone in central Christchurch to stay off the streets and report any suspicious behaviour,” he said in a statement.

Central city buildings, including the Civic Offices and Central Library, were also locked down.

The city council offered a helpline for parents looking for kids attending a mass climate change rally nearby.

“Please do not try and come and collect your children until police say it is safe for people to come into the central city,” they said.

In the aftermath of the shooting, the Test match between New Zealand and Bangladesh that was due to take place tomorrow in Christchurch was cancelled.

Mass shootings are rare in New Zealand, which tightened its gun laws to restrict access to semi-automatic rifles in 1992, two years after a mentally disturbed man shot dead 13 people in the South Island town of Aramoana.

However, anyone over 16 can apply for a standard firearms licence after doing a safety course, which allows them to purchase and use a shotgun unsupervised.