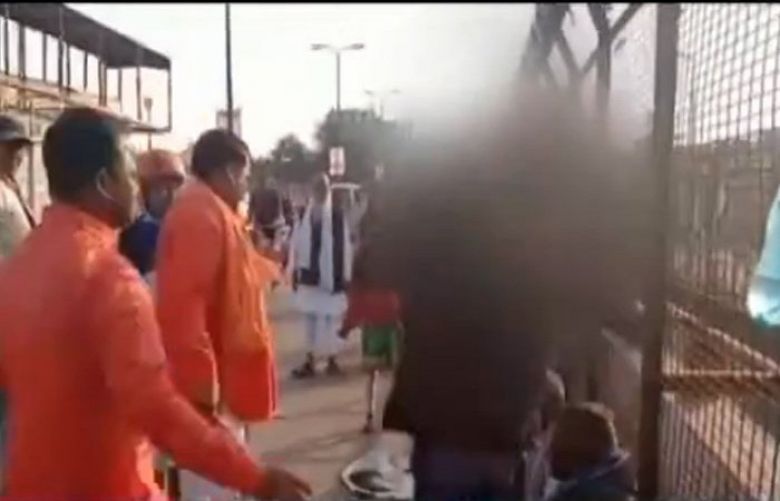 Two Kashmiri vendors in Indian city Lucknow were assaulted by members of a right-wing outfit on Wednesday.

According to Indian media reports, the men who were selling dry fruits on a roadside were abused, slapped and beaten with sticks.

A video of the incident that has since gone viral on social media. In the video, the Kashmiri men can be seen covering their heads and pleading to the attackers to stop beating them.

In another video, the attackers can be seen asking one of the men for his identity card as he tries to pack up and leave the spot.

The video also shows locals intervening and asking the men to stop the assault on the men. "Don't take law into your own hands. Call the police," one the locals can be seen saying.

When the two attackers were asked why they were beating up the Kashmiri men, they replied that they were ‘Kashmiris’. The Kashmiri men were also asked to produce Aadhar cards, but that did not stop the assault.

The men were eventually rescued by locals who also called the police.

The Lucknow police has arrested one of the attackers, while the other attacker is on the run.

The former chief minister of the occupied Kashmir Omar Abdullah tagged Indian Prime Minister Narendra Modi on Twitter and wrote: "Dear PM @narendramodi Sahib, this is what you had spoken against & yet it continues unabated. This is the state governed by your handpicked Chief Minister. Can we expect action in this case or do we file your concern & assurances as a jumla, meant to placate but nothing more? (sic)"

Nothing will do more damage to the idea of India in J&K than videos like these. Keep thrashing Kashmiris like this on the streets at the hands of RSS/Bajrang Dal goons & then try to sell the idea of “atoot ang”, it simply wont fly. https://t.co/MYkuEuDLjj