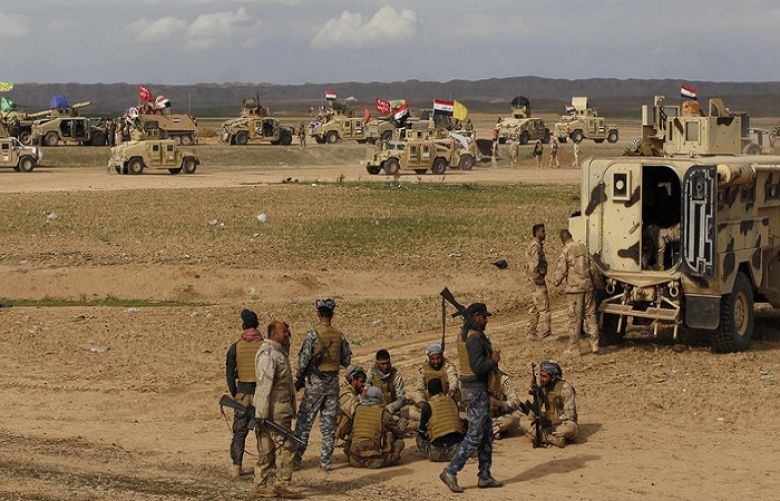 Iraq's pro-government Popular Mobilization Units accomplished their goals in the battle against the Daesh terrorist group in the Western flank of the flashpoint city of Mosul. Abu Mahdi al-Muhandis, the second-in-command of the forces commonly known by the Arabic name Hashd al-Shaabi, broke the news at a press conference on Friday, adding that the fighters had already "liberated 14,000 square kilometers and 360 villages," Arabic-language al-Sumeria TV network reported.

He went on to say that the pro-government fighters "have also managed to kill 2,000 Daesh terrorists West of the Northern province of Nineveh," of which Mosul is the capital.

Mohandis added that the units "are ready to liberate Tal Afar town," West of Mosul, from the grips of Daesh, and "are now waiting for the orders of Iraqi Prime Minister and Commander-in-Chief Haider al-Abadi."

He also underlined the units had so far liberated between 50 and 60 kilometers of the Iraqi-Syrian borderline.

Late last month, the paramilitary units, consisting of some 40 mainly Shia Muslim groups, reached the Syrian border in the North in an attempt to block Daesh from crossing the common border.

The military operation by Iraqi Army troops to liberate the city of Mosul from ISIL militants continued in the Holy month of Ramadan as Baghdad forces have laid full siege on the terrorists in the few districts that are still under the group's control with the only two options of surrender or die.

Meanwhile, the Iraqi Army soldiers continued their military operations in Western part of Mosul in Nineveh province, hitting hard the positions of the ISIL terrorist group to recapture Mosul’s Old City. Iraqi forces have been sweeping through Northwestern neighborhoods over the past few weeks in a way to invade the strategic Old City, after finding it hard to invade from the South.

The Old City is home of the ancient Grand Nuri Mosque, from which the group’s Leader Abu Bakr al-Baghdadi gave a famous sermon in 2014 declaring the establishment of the ‘caliphate’

Abadi announced in October 2016, the start of a military operation to recapture Mosul, the second largest city in Iraq which fell to the ISIL since 2014.

The Iraqi defense ministry announced earlier in January that the Daesh terrorist group has lost over 50 percent of its militants in the city of Mosul in Nineveh province as Iraqi troops have managed to recapture the Eastern part of the de facto Capital of the Daesh.

"The intelligence obtained by us indicates that there have been over 6,000 Daesh terrorists in Mosul and around 3,400 of them have been killed in battles with Iraq's joint military forces in the major city of Nineveh province," Iraqi Defense Ministry Spokesman Colonel Laith al-Naimi said.

He added that over 250 bomb-laden vehicles and the entire bomb-making workshops of the terrorists have been destroyed in Mosul which means that the Daesh has been paralyzed by the Iraqi forces.

The Iraqi Army started a new phase of its military operation in Nineveh province late February to drive the Daesh terrorists out of their bastion in the Western part of the city of Mosul.

With half the city under the control of Baghdad forces, the Iraqi Armed Forces will likely face heavier resistance in the Western part of Mosul, as the Daesh attempts to hold onto their final positions.

The Joint Operations Command announced in May that more than 16,000 Daesh fighters were killed since start of Mosul operations in October.

Local sources had disclosed that the Daesh is preventing civilians in the Western part of the city of Mosul from leaving the region in a move to use them as human shields as the terrorist group's positions are under intensifying attacks by various troops.

Commanders expected that the battle in Western Mosul to be more difficult, in part because tanks and armoured vehicles cannot pass through the narrow alleyways that crisscross ancient districts of the city.

Meanwhile, Iraqi commanders disclosed that more than 90 percent of territories in Western Mosul is under Iraqi troops control, predicting to retake the city very soon.

The second largest city in Iraq fell to the Daesh group in 2014, when the terrorists began a campaign of death and destruction in the Arab country.