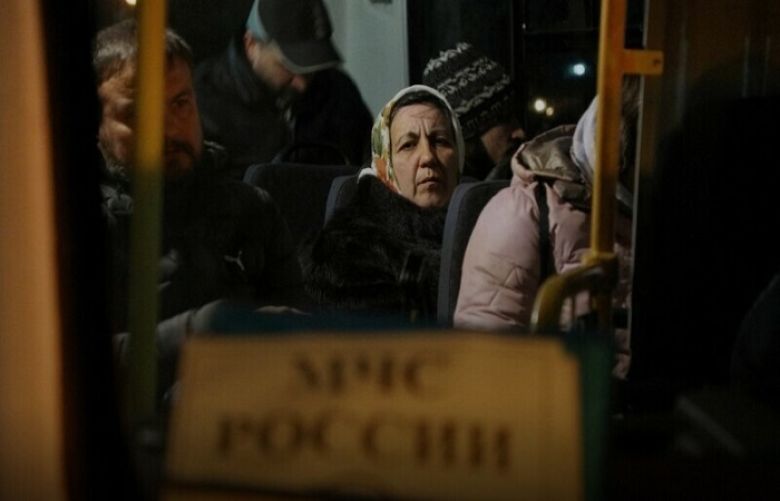 Ukrainian troops pushed forward and a battle-scarred stretch of the front fell silent on Thursday, after Moscow ordered one of the war’s biggest retreats, though Kyiv warned that fleeing Russians could still turn Kherson into a “city of death”.

A small group of Ukra­inian soldiers was shown on Ukraine’s state TV being greeted by joyous residents in the centre of the village of Snihurivka around 55 km north of Kherson city, with a Ukrainian flag fluttering above the square behind them.

“Today, on Nov 10, 2022, Snihurivka was liberated by the forces of the 131st Separate Intelligence Batt­alion. Glory to Ukraine!” a commander declared as dozens of locals applauded, cheered and filmed the soldiers on their phones.

A few kilometres away, in a devastated frontline village in an area already held by Ukrainian forces, the guns had fallen silent for what residents said was the first quiet night since the war began.

“It’s like there was no war,” said Nadiia Nizarenko, 85, her face lit by a bulb powered by a car battery in the cramped apartment that she, her daughter and son-in-law had refused to abandon as fighting had raged daily around them.

Russia said on Wednesday it still saw no progress on easing its exports of fertilisers and grain — parts of the Black Sea grain deal that Moscow views as fundamental to extending the initiative beyond next week.

“We hope the silence means the Russians are leaving.” Ukraine’s army chief Valeriy Zaluzhnyi said Ukrainian troops had advanced 7 km in the past 24 hours and had recaptured 12 settlements in the south, although he would not confirm whether Russia was indeed pulling out as announced.

“We continue to conduct the offensive operation in line with our plan,” he wrote in a post on Telegram.

The frontline villagers were leery of Moscow’s intentions. The Russians could be preparing a trap, said Nizarenko’s daughter, Svitlana Lischeniuk, 63, as she unloaded milk cans and jugs filled with well water from a trailer hitched to the family car.

Still, there was joy. Petro Lupan, a volunteer distributing bread to residents, told Reuters he could not find words to express his feelings after he learned of the recapture of Snihurivka from a friend reached by phone there.

Foreign Ministry spokeswoman Maria Zakharova told reporters the United States and European Union were obstructing Russia’s exports and said it remained unclear whether Moscow would extend its participation in the initiative, which expires on Nov 19.

“The US and the EU continue to put up obstacles to the export of Russian fertilisers and grain. We will take this into account when deciding whether to extend the grain deal,” she said.

Russia agreed to a deal brokered by the United Nations in Turkey in July that allowed Ukraine, a major grain exporter, to resume exports through Black Sea ports that Russian warships had blockaded.

But Moscow complains that its own grain and fertiliser exports, though not directly targeted by Western sanctions, are effectively blocked because the sanctions affect insurance, port access and other key logistics.