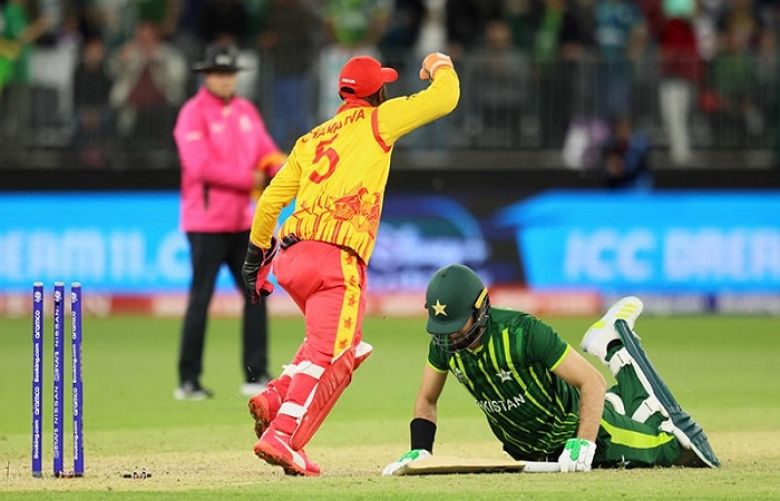 Zimbabwe defeated Pakistan by 1 run in a nerve-wracking contest during the T20 World Cup on Thursday in Perth.

Earlier, Mohammad Wasim and Shadab Khan shared seven wickets between them as Pakistan restricted Zimbabwe to 130-8.

Pakistan will fancy their chances of getting the 131 they need to bounce back from their heartbreaking opening loss to India on Sunday.

Zimbabwe elected to bat first and Wesley Madhevere and skipper Craig Ervine used the pace of Pakistan's seamers to good effect with a string of boundaries in a 42-run stand.

But Shadab's 3-23 with his wrist spin and pace bowler Wasim's 4-24 held Zimbabwe - whose opening match in the Super 12 in Hobart was a washout - to a below-par total.

Ervine smashed Naseem Shah for two delightful fours but mistimed an attempted pull off Haris Rauf to be caught out for 19 off 19 balls.

Wasim justified his selection in place of batsman Asif Ali as he sent back Madhevere trapped lbw for 17, a decision the umpires denied but Pakistan successfully reviewed.

The left-handed Williams hit a few boundaries in his attempt to take the attack to Pakistan, before he was bowled by Shadab for 31.

Shadab struck again to get Regis Chakabva out next ball with skipper Babar Azam taking a one-handed stunner at slip.

Zimbabwe slipped further when Sikandar Raza fell for nine off Wasim, who took one more to be on a hat-trick, before giving away two wides and a single to Brad Evans.

Zimbabwe lost four wickets on 95 — Williams, Chakabva, Raza and Luke Jongwe — before Evans took his team past the 120-run mark.

Evans became Wasim's fourth wicket in the final over, gone for 19.