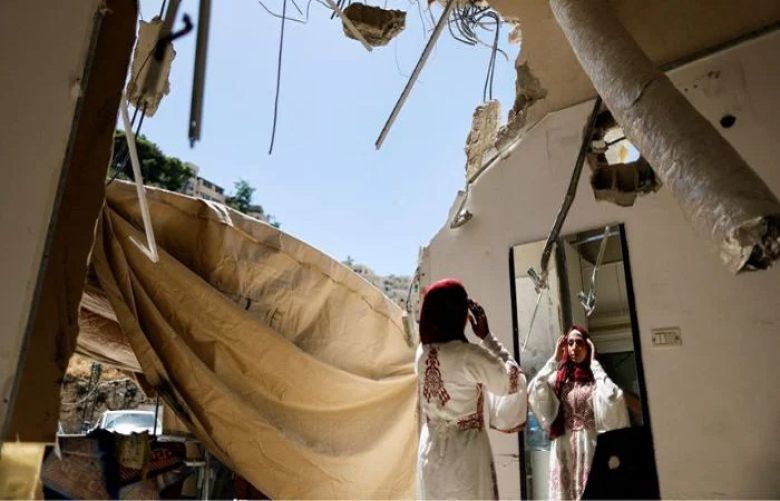 Palestinian Rabeha Rajabi did not think she would be holding her wedding celebrations in the rubble of her own home in occupied East Jerusalem, until Israeli authorities destroyed it.

"Before any blow hit the house, it hit our hearts," said Rajabi, speaking among the debris and donning a traditional Palestinian thobe and henna-inked hands. "This was our home, our dream, our memories."

The 22-year-old bride said she moved to the Ein al-Lawza neighbourhood from another part of Jerusalem as a young child and that over the years her family were served several demolition orders on the house they had built, putting them on edge.

In Arab tradition, on wedding day the groom's family arrives to greet the bride in the home she grew up in, an emotional ceremony symbolising the new life she is about to embark on.

The groom of a Palestinian bride Rabeha Al-Rajabi, celebrates together with friends and family during a pre-wedding ceremony at Al-Rajabi house, that was partly demolished by Israel authority, in East Jerusalem June 11, 2022.—Reuters

The groom of a Palestinian bride Rabeha Al-Rajabi, celebrates together with friends and family during a pre-wedding ceremony at Al-Rajabi house, that was partly demolished by Israel authority, in East Jerusalem June 11, 2022.—Reuters

"We had other plans but because of the demolitions and our challenging living situation, everything changed," she said.

Since 2009, when the United Nations began documenting the practice, more than 3,000 Palestinians in East Jerusalem have been displaced because Israeli authorities have demolished, or forced owners to demolish, structures. Thousands more live at risk of displacement due to outstanding demolition orders.

The issue is one of the most sensitive areas of contention in the decades-long dispute over East Jerusalem, which was seized by Israeli forces in 1967 and later formally annexed by Israel in a move not recognised internationally.

"Their goal is to drain the Palestinian residents, financially and morally," said Fares Rajabi, the bride's brother. "It is a policy of displacement."

Israel says the demolition orders in Jerusalem are issued for illegal constructions, although Palestinians object that it is nearly impossible to get building permits and see the policy as part of an effort to force them out of the city.

"Just as illegal construction is demolished across the country, it is the same in East Jerusalem," King told Reuters, adding that authorities have been approving building permits.

"You can't say we demolish (buildings) to force them out and not mention that we are authorising so many construction plans," he said.

Hundreds of units were approved in one Palestinian neighbourhood only last week, King said. The municipality did not provide data for the past five years on building plans for Palestinians.

According to a 2021 report by Ir Amim, an Israeli rights group advocating for an equitable Jerusalem, the municipality is only approving spot plans that do not correspond to the needs of the city's Palestinian population.

Since 1967, Israel, which regards Jerusalem as its indivisible capital, has confiscated more than 38% of East Jerusalem's territory to build tens of thousands of housing units for Israeli residents, said Oshrat Maimon of Ir Amim. Only 8.5% of the entire city was zoned for housing for Palestinians.

About 370,000 Palestinians live in Jerusalem, making up 38% of the city's population, according to Israel's Central Bureau of Statistics. They hold residency status, which can be revoked if they leave for several years. Many rejected offers of Israeli citizenship after 1967, fearing it would undermine Palestinian claims to the area.

"We will remain, even if (Israel) razes the entire building," Fares, the bride's brother, said, wearing a suit and bow tie as he stood in front of his family's home, wires protruding from the destroyed walls, a Palestinian flag flying at the top.

"We want to prove to the occupation that despite our misfortunes, we are capable of rejoicing and we will remain rooted in our land."