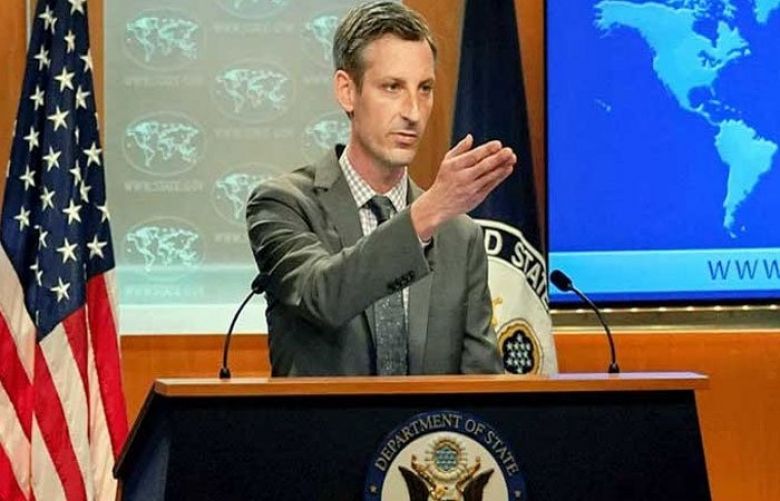 US State Department Thursday said that Washington was in regular touch with Pakistan over Afghanistan’s issue.

Addressing a media briefing, US State Department spokesperson Ned Price said, “We have been in regular touch with Pakistani counterparts as well as Pakistani leadership. We’ve discussed Afghanistan in some detail.”

Responding to a question about US State Secretary Antony Blinken’s statement in which he had said that the US will assess its ties with Pakistan, the spokesperson said, “Pakistan was represented at the ministerial that Secretary Blinken and Foreign Minister Maas convened last week at Ramstein Airbase in Germany. Pakistan contributed to that forum, echoed much of what we heard from other participants.”

“And as I said before, there was a good deal of consensus that the gains of the past 20 years, especially on the part of Afghanistan’s women and girls and minorities, is – preserving those is in everyone’s interests.,” he added.

He said that easing the humanitarian plight of the people of Afghanistan is in everyone’s interest, adding that includes Pakistan as well as countries that may be farther afield.

The spokesperson said that Pakistan has frequently advocated for an inclusive government with broad support in Afghanistan.

He said, ”What the Secretary was referring to yesterday is that we are going to continue to look to Pakistan and to other countries in the region to make good on their public statements, to in different ways step up to support the people of Afghanistan and to work constructively not only with us but the international community to see to it that the priorities that we share – and that includes the humanitarian concerns, it concerns the rights and the gains of the Afghan people over the past 20 years, as well as the counterterrorism concerns that we all have-to ensure that we are all walking in the same direction.”

Earlier on September 14, US Secretary of State Blinken had said that Washington will reassess its relationship with Pakistan in the coming days.

According to Reuters, the US had made it clear to Pakistan that it did not want Islamabad to recognise the Taliban government until it doesn't give women their due rights and allows Afghans who want to leave the country, to do so.

In the first public hearing in Congress about Afghanistan since last month's collapse of the US-backed Afghan government, US Secretary of State Blinken had told the House of Representatives Foreign Affairs Committee that Pakistan has a "multiplicity of interests, some that are in conflict with ours."

"It is one that involved hedging its bets constantly about the future of Afghanistan, it's one that's involved harboring members of the Taliban ... It is one that's also involved in different points cooperation with us on counterterrorism," Blinken had said.

Asked by lawmakers if it is time for Washington to reassess its relationship with Pakistan, Blinken had said the administration would soon be doing that.