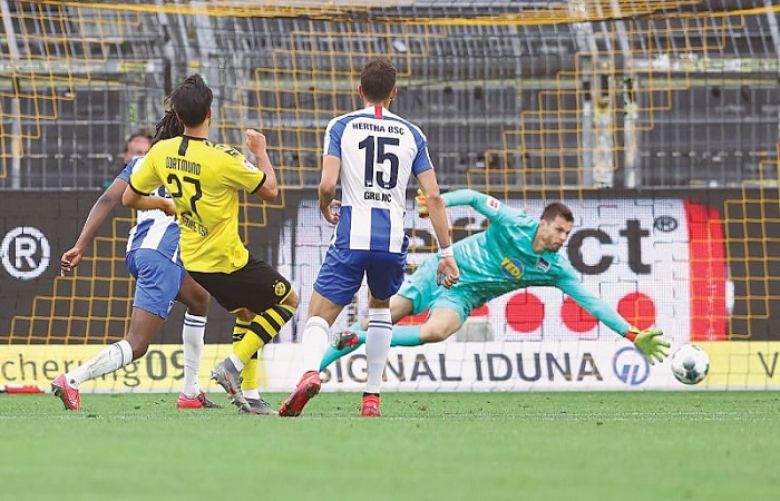 Bundesliga players wore black armbands and took the knee in displays of support for the Black Lives Matter protests on Saturday, as Bayern Munich took another step toward a record-extending eighth straight title with a ninth successive win.

Bayern striker Robert Lewandowski scored his 30th league goal of the season as Bayern came from behind to claim a 4-2 victory over Bayer Leverkusen, a win which kept them seven points ahead of second-placed Borussia Dortmund, who beat Hertha Berlin 1-0.

All of Dortmund and Hertha’s 22 outfield players took a knee in the centre circle together before the top tier’s late game with no fans present. Coaches and other team members from both sides did likewise beside the field, bringing to mind former San Francisco 49ers quarterback Colin Kaepernick’s protest before games against police brutality and racial inequality.

Dortmund players had warmed up wearing T-shirts with slogans such as ‘United together’, and ‘No justice, no peace’.

Bayern and Leverkusen players wore black armbands against racism in their game earlier in the day. Bayern players had ‘Black Lives Matter’ printed on their armbands, partly covering sponsor Qatar Airways logo on the left arm.

As players, we always have the same message — we are tolerant, we are open, we are open to the world,” Bayern captain Manuel Neuer told Sky.

The teams’ gestures were made as tens of thousands of people across Germany attended anti-racism demonstrations in the wake of the death of George Floyd in Minneapolis on May 25. Floyd, a handcuffed black man, died after a white police officer pressed his knee against his neck, ignoring his “I can’t breathe” cries even after Floyd eventually grew still.

Fortuna Duesseldorf’s American midfielder Alfredo Morales took a knee before coming on in his team’s 2-2 draw with 10-man Hoffenheim, and Cameroon midfielder Pierre Kunde did likewise after scoring for Mainz 05 in a 2-0 derby win at Eintracht Frankfurt.

Leverkusen striker Lucas Alario opened the scoring in the ninth minute, staying calm to beat Neuer at the near post with the outside of his boot. The linesman lifted his flag for offside, but the goal was given after a VAR check.

The home side played well until Leon Goretzka set up Kingsley Coman to equalise in the 27th, then scored himself with a fizzing shot on a counterattack in the 42nd.

There was still time before the break for Serge Gnabry to grab Bayern’s third, lifting the ball over keeper Lukas Hradecky.

We didn’t start well, but I think it’s something which really distinguishes us at the moment, that we are able to fight our way back into games,” Goretzka told Sky.

Though his side had played well for the first half-hour, Leverkusen coach Peter Bosz reacted with three changes at the break.

But another defensive mistake preceded Lewandowski’s goal in the 66th, a powerful header from Thomas Muller’s perfectly-placed cross.

Florian Wirtz restored some pride for Leverkusen with a brilliant finish past Neuer in the 89th. He became the youngest goal-scorer in the Bundesliga at just 17 years and 34 days.

We already knew he was a huge talent,” said Bosz of the teenager, who beat the record set by Nuri Sahin for Borussia Dortmund in November 2005 by 48 days.

Emre Can’s second-half strike was enough for Dortmund to battle to a home win over Hertha. England winger Jadon Sancho, who was among the first Bundesliga players to lend his voice to the protests last weekend, missed from close range just after the break before setting up Can with a deft chip over the back line on 57 minutes.

Timo Werner set up Patrik Schick on 27 minutes to give Leipzig the lead, but they were forced to defend it with 10 men after Dayot Upamecano was booked twice in the first half.

Fortuna themselves missed the chance to move towards safety, as they battled to a dramatic draw against Hoffenheim.

A headed opener from Rouwen Hennings and a red card for Hoffenheim’s Benjamin Huebner put the home side in pole position. However, the visitors struck back with goals from Munas Dabbur and Steven Zuber before Hennings saved a point with a late penalty.

Having sealed a crucial win with his 77th-minute strike, Cameroon international Kunde also joined the protests, taking a knee in place of a celebration.

I think it’s good. It isn’t a political statement, it’s just a position, and these are values that we have. For me, there is no other possible position to take,” said Mainz sporting director Rouven Schroeder.