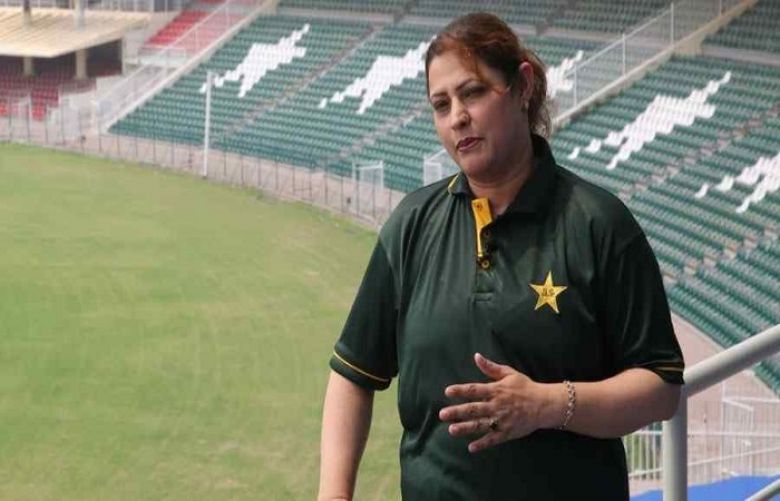 It all started fourteen years ago from an innocent inquiry. Taken aback by the notion of a man officiating a women’s match, Afia Amin asked Adnan Rashid the reason behind him taking the role to which she was informed that it was due to the lack of female umpires in the circuit.

“It made me wonder why women cannot umpire matches when they can play?” recalls 37-year-old Afia, who now has more than 150 official matches under her belt, while speaking to press “It was at that time I told my husband that next year I would be officiating women’s matches.”

Afia had been into sports from her early days, playing baseball for her school and college teams. But, it was the unwillingness of her family that kept her from pursuing sports as a profession early in life.

“People from my family don’t venture into sports. I am the only person to have done this,” she said. “It is very difficult in our society for women to get into this field. There’s a lot of convincing that needs to be done.

“It is very difficult for a woman to get out of house in my family, even if it is for education. I took up umpiring after marriage. And it happened only because of my husband. He is my inspiration”

Three years into her marriage, Afia started preparing for examinations to get herself on the PCB’s umpiring panel. And, within a year, she had cleared them.

As it was to happen, in 2006, she found herself in the middle of the action as an umpire in the same women’s tournament, she had her eyes on. Four years later, Afia stood in the semi-final – between Abbottabad and Karachi, at the Gaddafi Stadium – during an U16 regional tournament.

“She was eager to learn more and more about umpiring so she used to talk to me regarding the laws of the game,” says Adnan, who began his umpiring career in 2005 and has officiated 13 first-class matches since 2016. “We used to discuss the laws at home and how to adjudge difficult appeals, like LBW. I also guided her on how to handle players during matches in her early days. We used to talk about various aspects of umpiring.

“One can learn more about umpiring by being in the field and officiating more and more matches. Our women umpires have all the necessary skills. They only need to be polished and that can be done by giving them more matches.”

Afia is now amongst the senior women umpires in the country. There are a total of nine in the country because of the lack of interest in the women to take up umpiring as a profession.

But, Afia hopes to change that.

“The barriers for women do exist,” she said. “The families do not allow girls and women to enter this field. But, one of my motivations to enter the profession of umpiring was to be a role model for the girls, my daughters, and women in my family.”

Her eyes are now set on the women’s World Cup. Because, that, along with providing her the international exposure, will help her in establishing Pakistan as a force to reckon in the field of umpiring.

“I look up to Aleem Dar. He has made our nation proud with his achievements at the international level and I aim to do the same. I desire to officiate the ICC matches, the women World Cup matches. I look forward to that opportunity.”