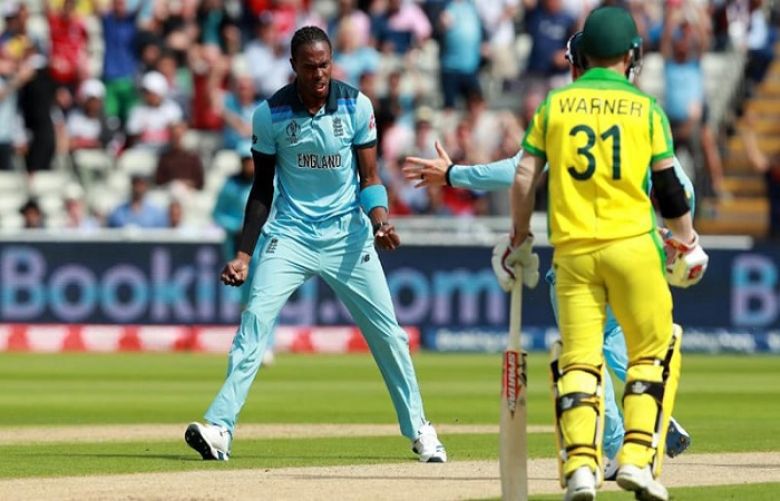 England skipper Eoin Morgan and his partner Joe Root put up a brilliant performance as they carried their side over to an 8-wicket victory against defending champions Australia in the World Cup semi-final showdown between the two sides at Edgbaston on Thursday.

Building on the groundwork laid by openers Jonny Bairstow (34) and Jason Roy (85), the two put up a 79-run partnership and remained standing till the very end.

England is now one step closer to their maiden victory in the tournament as they face off against New Zealand on Sunday. Both sides have yet to win the title.

Skipper Eoin Morgan and Joe Root got busy piling on the runs after the side lost their first two wickets under 20 overs.

The two reached their 50-run partnership at the end of 28 overs.

Australia got their first breather in the 18th over when Mitchell Starc dismissed Bairstow.

Roy was the second man sent packing by the Aussies at 19.4 overs when Cummins bounced him out.

The dismissal was viewed by many as wrongfully given by the umpire, with the commentators at ESPNcricinfo observing: "Replays suggest Roy did not touch it. England have lost their review and Roy has to go. He's seething, but umpire Erasmus chats with him and sends him off. He throws his gloves in the change room."

Australian bowlers, who have been outstanding throughout the World Cup, seemed helpless today before the England openers.

The win forecaster, that was already tipped in England's favour, went up to 99.61 per cent after an expensive over by Steve Smith in which Roy struck three sixes in a row.

Australia's innings ended on a dismal note as the team was all out on 223 with one over remaining.

The defending champions had started miserably and lost their top three batsmen and managed to score merely 27 runs — their lowest score in an opening powerplay. They were reduced to 15 for three in seven overs after Chris Woakes and Jofra Archer swiftly ripped through their top order.

Skipper Aaron Finch was bowled out for a duck by Archer in the second over of play while Woakes picked up the wickets of David Warner (9) and Peter Handscomb (4).

The loss of Finch and Warner so early in the game was a blow to Australia, as the two have consistently built strong partnerships that have proved to be a major contributor in their team's victories in the group matches of the World Cup.

Steve Smith (85) and Alex Carey (46) managed to bring some stability to the innings by forming a 100-plus run partnership as English bowlers tried to restrict the flow of runs. Together, they had added 103 runs to the scoreboard.

But Australia's batting momentum was shaken for the second time in the day when Adil Rashid dismissed Carey in the 28th over. Rashid gave England another reason to celebrate two balls later after he dismissed Marcus Stoinis for a duck in the same over.

Archer struck for the second time when he dismissed Glen Maxwell (22) in the 35th over. On the other side of the pitch, Smith could only shake his head in disappointment as he saw his third partner depart in eight overs. The score predictor had dropped to 229 runs from 310 at the start of the game.

Rashid bagged his third wicket of the day when he removed Pat Cummins (6) who was caught by Joe Root at first slip in the 39th over.

Cummins was replaced by Mitchell Starc, who hung on along with Smith to lead Australia beyond 200 runs in bid to post a modest score. Together, they managed to post 43 runs on the scoreboard.

Jos Buttler struck a blow to Australia by throwing a direct hit that removed Smith — who had acted as an anchor for the Australian batting lineup — in the 48th over.

Mitchel Starc (29) was gone on the next delivery by Chris Woakes when he tried the ball hard but was caught by Buttler.

Nathan Lyon and Jason Behrendorff tried to hold their ground for the next two overs but a yorker by Mark Wood in the 49th over, that bowled out the latter batsman, brought an end to the Australian innings.

Rashid and Woakes stood out among the bowlers, bagging three wickets each, though the former proved to be more expensive as he gave away 54 runs in his 10-over spell. Archer picked 2-32 while Wood bagged one wicket.

Australia had won the toss and opted to bat first.

The winner of today's match will head to the final at Lord's to face New Zealand, who emerged victorious against India in the first semi-final on Wednesday.

England are unchanged, while Australia bring in Peter Handscomb for the injured Usman Khawaja. Handscomb will bat at number four, meaning Steve Smith has gone up the order to number 3.

There were scattered clouds on a sunny and warm morning in Birmingham.