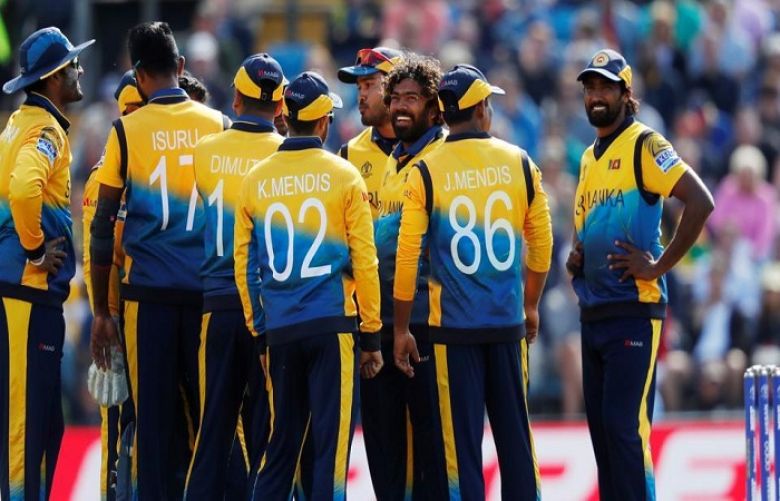 Malinga dismissed dangermen Jos Buttler and Joe Root among his victims in a devastating spell that ruined England s bid to chase down Sri Lanka s modest total of 232-9.

Sri Lanka were also indebted to an unbeaten 85 from Angelo Mathews as they won for just the second time in six games. Tournament favourites England, bowled out for 212, have now lost two of their six group matches.

England were 76-3 off 20 overs but, significantly, the in-form Joe Root was 40 not out on his Yorkshire home ground

Malinga, renowned for his unorthodox ‘slingshot’ action dismissed Jonny Bairstow for a golden duck as the batsman aimed across the line, with a review unable to spare the local hero.

James Vince (14), deputising for the injured Jason Roy, then fell in all too familiar fashion when an edged drive off Malinga was caught by Kusal Mendis at slip.

Morgan, fresh from his one-day international record 17 sixes against Afghanistan, made a cautious 21 featuring a mere two fours before Udana held a sharp return catch to dismiss the Dubliner.

Sri Lanka’s total of 232-9 represented something of a recovery after a collapse to three for two.

Angelo Mathews’ painstaking 85 not out helped them bat their full 50 overs after Avishka Fernando revived the innings with a dashing 49 in his first match of the World Cup.

Spinners Adil Rashid and Moeen Ali bowled 20 overs between them for an economical 85 runs.

"We started off brilliantly to get two early wickets and then spinners controlled it in the middle," Wood said.

"They didn’t get away from us at all. Angelo Mathews played well but we restricted them. It was a great team performance."

And two balls later, without another run on the board, Kusal Perera slashed Chris Woakes to third man where Moeen, in his 100th ODI, held a safe catch.

But number three batsman Fernando, in just his seventh match at this level, hit 14 runs off one Archer over.

And off the penultimate delivery off the 10-over powerplay, Fernando hooked Archer for a six out of the ground that saw the umpires call for a replacement ball.

But, like Perera before him, Fernando was caught off an uppercut to third man, with Rashid holding on to a misjudged shot off Wood.

It was the end of a 39-ball innings featuring two sixes and six fours.

Mathews looked badly out of touch during an 84-ball fifty with Sri Lanka managing just six boundaries in total from the 11th to 40th overs.

But with Yorkshire’s Rashid taking two wickets in two ball, the former captain’s runs kept his side in the game.

England, third in the table, will go ahead of leaders Australia if they defeat Sri Lanka, currently sixth in the standings.

The top four sides at the end of the 10-team round-robin group stage will qualify for the semi-finals.