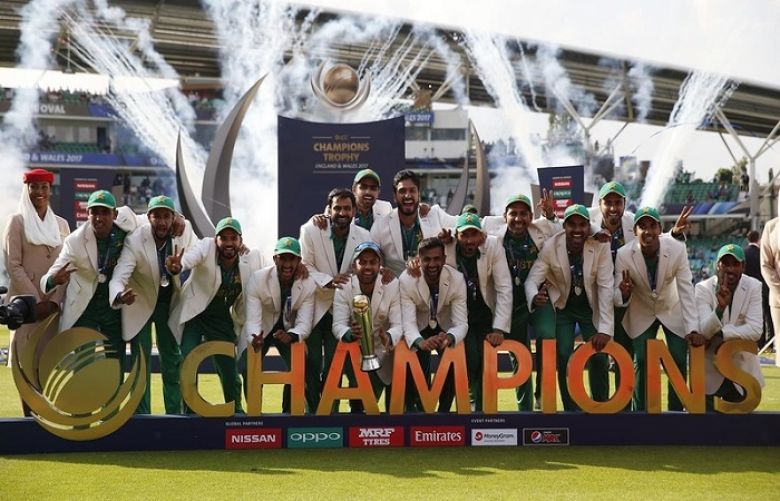 Pakistan thrashed favourites India by 180 runs in a thrilling competition at London's Oval ground to clinch the Champions Trophy title on Sunday.

The green shirts set up a daunting 339-run target for the men in blue, but Indian batting collapsed under a calculated bowling attack, with all out at 158 runs in the 31st over.

Hardik Pandya was the top-scorer for India with 76 runs before he was run out by Hasan in the 27th over after a mix-up with partner Ravindra Jadeja. The left-hander scored 54 runs off 32 balls, the fastest half-century in a world One Day International (ODI) final. Pandya was followed by Yuvraj Singh and Shikhar Dhawan, who racked up 22 and 21 runs respectively before being dismissed.

This is the greatest number of wickets India has lost at the end of 14 overs since Jan 2013 in a 50-over game. Two overs into the match, opener Rohit Sharma succumbed to a LBW, whereas skipper and heavy-hitter Virat Kohli was caught out by Shadab Khan. Dhawan was caught out by Pakistan skipper Sarfaraz Ahmed at the tail end of the 9th over, and Shadab Khan took Yuvraj Singh's wicket in the 13th over in an LBW appeal led by Sarfaraz which was initially ruled not out by the umpire.

MS Dhoni was caught by Imad Wasim off a delivery by Hasan Ali, whereas KM Jadhav was caught out by Sarfaraz. Jadeja left the field after Babar caught him at the widish slip, marking Junaid Khan's first wicket in the 28th over.

Ravichandran Ashwin was caught out by Sarfaraz off a delivery by Hasan Ali.

India won the toss and opted to put Pakistan in to bowl first. The green shirts set a daunting target of 339 for the loss of four wickets for India to chase down ─ the team's second-highest total against India. A 128-run opening partnership between Fakhar Zaman and Azhar Ali set the mood for the first inning, with Azhar and Muhammad Hafeez both racking up half centuries, whereas Fakhar smashed 114 off 106 deliveries, and Babar Azam scored a solid 46 off 52. The last time Pakistani openers scored more than 100 runs prior to the fall of the first wicket in two consecutive matches was in 2003. This is only the second time the same has happened outside Asia.

Head-to-head, the record is in favour of India against Pakistan in all ICC tournaments. However, the last time Pakistan beat India was in 2009 ─ also during a Champions Trophy match. The game appeared to be taking a predictable turn when Bumrah seemed to have nicked Fakhar to the keeper in the fourth over. A replay revealed the bowler had overstepped the crease and it was ruled a no ball, taking the heat off the green shirts.

12 runs came off the high-yielding fourth over, which featured two boundaries, two no-balls and a wide ball, as Pakistan stood at 19 runs with the loss of no wickets. Azhar smacked the fist six of the innings off Ashwin in the eighth over after he and Fakhar made themselves at home on the pitch.

The team had a firm grounding with 56 runs on the board by the end of the first 10 overs, as the two openers scored from both sides, turning up the pressure on the Indian side. Just a couple of balls after 200 came up for Pakistan in the 33rd over, Fakhar was caught out by Pandya for 114 runs. He scored his maiden ODI century in style with a four off the 31st over.

Shoaib Malik left the field after Kedhar Jadhav caught him playing a mistimed shot over the mid-off in the 40th over. In an effort to hit a boundary and reach the 50-run mark, Babar Azam played a mistimed shot straight into the Yuvraj Singh's hands and departed with 46 runs to his name in the 43rd over.

The Indian lineup remains unchanged, whereas Pakistan has replaced Rumman Raees with Muhammad Amir. Amir was ruled out of Pakistan's semi-final against England due to a back spasm during a practice session. In Champions Trophy history 2013 has been the only edition in which the team batting first won the final. The other 5 finals have been won by the chasing team.