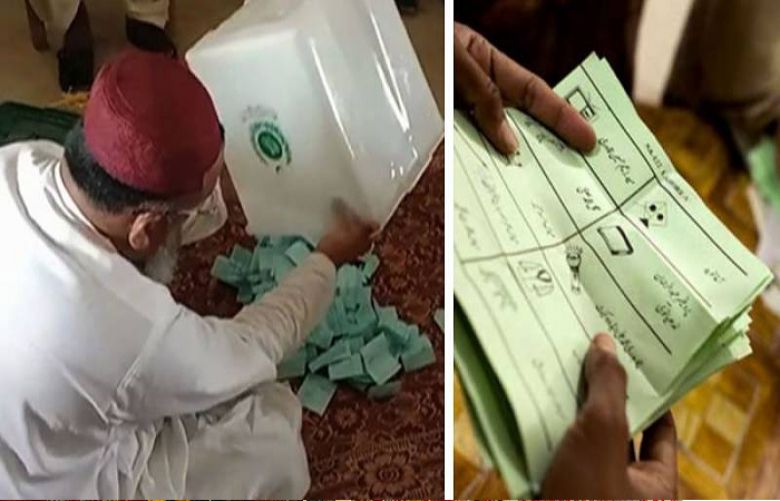 The results of the Sindh local government election in 16 Karachi and Hyderabad districts continued to pour in on Monday. Preliminary and unofficial results, which came just before 6pm, indicated a neck and neck battle between Jamaat-e-Islami (JI) and Pakistan Peoples Party (PPP) for Karachi mayor slot. Pakistan Tehreek-e-Insaf (PTI) holds a distant third spot.

So far, results of Karachi's 40 union committees (UCs) have been released out of 246.

Meanwhile, PTI suffered a setback in Karachi local bodies polls when Khurram Sher Zaman — who was considered the party’s candidate for the top slot of the mayor — lost to PPP’s Najmi Alam in Saddar.

However, the initial results of the much-delayed local body election's second phase in Karachi could not be finalised even past midnight despite the polling process ending at 5pm, political parties started claiming that “rigging is underway in the metropolis”.

The voting kicked off at 8am and continued uninterrupted, with reports of sporadic clashes. However, several confrontations were also reported even after the polling process ended.

The parties seemingly did not respond strongly to the clashes, however, later on, claims were made that the Sindh government and the Election Commission of Pakistan (ECP) were involved in delaying the release of results.

As hundreds of thousands of people headed to vote in a bid to elect their local representatives, many political parties had also earlier complained and demanded the ECP to increase the polling time as the process began late at some of the stations — which was accepted in some polling stations.

At first, JUI-F — an ally of the Pakistan Peoples Party (PPP) — and JI alleged that the Sindh government had used delaying tactics by not ensuring that the polling officers reach the stations on time.

"Everything has been pre-decided and they have just staged the elections for a show," JUI-F's Karachi leader Qari Usman alleged while speaking to reporters in the metropolis.

When the day began to pass and results stopped coming in, JI Karachi Emir Hafiz Naeem Ur Rehman alleged that rigging was underway in the metropolis as he castigated both — the ECP and Sindh government.

In response to the delay, Rehman directed the public to encircle polling stations across the city as he made claims of rigging in the process.

Addressing a presser at the Idarah Noor-e-Haq, the JI’s mayoral candidate said that "it is the party's constitutional, democratic, and legal right" to be provided numbers of their election results.

However, the JI's senior leader said Chief Election Commissioner Sikandar Sultan Raja and the secretary of the Election Commission of Pakistan (ECP) had issued clear orders to provide Forms 11 and 12, "which are not being followed".

The JI leader stressed that while he would congratulate successful candidates in the local body polls and encourage those who had lost, the party won’t allow the hijacking of people’s mandate.

Around 8,706 polling stations were set up for the local body polls with 1,204 for males and 1,170 for females in the two divisions — Karachi and Hyderabad. Out of the total polling station, over 8,000 were declared as “sensitive” or “highly sensitive.”

It is pertinent to mention here that 830 candidates — seven in Karachi and 823 in Hyderabad — have been elected unopposed in the two divisions.