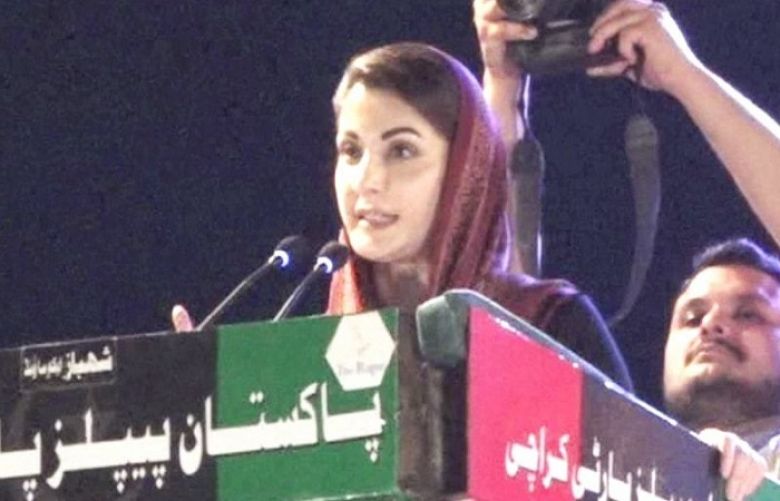 Hundreds of supporters of the opposition parties welcomed the leaders at the venue, dancing to the beat of PPP’s anthem.

The crowd waved flags of the various political parties represented by the PDM. Bilawal thanked the enthusiastic crowd and welcomed the JUI-F chief and PML-N vice president.

Addressing the rally, PML-N vice-president Maryam Nawaz thanked the PPP leadership and people of Karachi for according her a warm welcome. She also paid tribute to the provincial government for their efforts amid the Covid-19 pandemic, for which she said they were subjected to humiliation and taunts by the federal government.

She then directed her tirade at Prime Minister Imran Khan, who a day earlier had declared that he would get “tougher” with the opposition and vowed to start making all-out efforts to bring Nawaz Sharif back to the country and send him behind bars.

“Yesterday, you must have seen on your TV screens a man screaming his defeat,” she told the crowd. “You [PM Imran] tell people ‘ghabrana nai hai’, there has only been one jalsa yet and you are worrying already.”

“Your fear was apparent from every word, every action of yours, and people want to see this fear on your face,” she told the premier. “If you don’t know how to show grace and have no one to teach you, you should've learned from Nawaz Sharif,” she said, reminding the premier of the PTI’s 126-day sit-in on Shahrah-e-Dastoor.

“You [PM Imran] addressed empty chairs, dug democracy's grave, [and yet] Nawaz Sharif never took your name. Even today, you will long for it but Nawaz Sharif will not even take your name, because children have no role in the fight between elders,” she said.

establishment of orchestrating the ouster of his government. “They are flustered by Nawaz's speech, which by the way was banned from TV,” she said. “When you didn’t allow his speech to be aired, you have no right to comment on it. When it was not aired, where did you watch it?” she asked.

Justifying the points raised by Nawaz, Maryam questioned why it was wrong for the PML-N supremo to say that Justice Shaukat Aziz and Justice Qazi Faez Isa should not be punished for following the law.

“You say we will ban PML-N. Don’t even think about it,” she warned. “This is PML-N, the biggest party of Pakistan. This isn’t PTI that can be banned by some General Pasha or PML-Q that was created by Musharraf,” she said.

“If you ban PML-N, you will have to ban Pakistan's masses as well. It is not just a party, it is the identity of millions of people.”

Maryam also took the premier and other government ministers to task for declaring the opposition leaders traitors. “When answers are demanded, you say we are traitors,” she said, adding that Fatima Jinnah, the founder's sister, was also declared a traitor. “So don’t scare us [by declaring us] traitors.”  “You say the opposition is speaking Modi's language, when it was you prayed for Modi's re-election, were dying to talk to him, gave him Kashmir on a plate […] and we are the one speaking his language?  “When you are pressed for answers, you hide behind the armed forces. You coward! You bring the army into disrepute. You use them [army] to hide your failures. Who gave you this right?” she asked, questioning if the army belonged to the premier or the PTI alone?

“We can’t respect those who violate their oaths,” said Maryam. “Is Nawaz wrong in saying that army shouldn’t interfere in politics?” she asked.

MNA and Pashtun Tahaffuz Movement (PTM) leader Mohsin Dawar, who was one of the first speakers at the rally, termed the PDM as a "beginning for real democracy and civilian supremacy" in the country. He criticised the incumbent government for filing "baseless cases" against political workers, whether they were from Waziristan, Gilgit Baltistan, Balochistan or Sindh. The cases, Dawar said, were filed due to political differences, adding that the current regime was "worse than a dictatorship".

"I consider this government to be worse than a dictatorship because they have even placed a prime minister as a punching bag. In reality, the decision makers are Pakistan Army and its agencies," he declared.

Dawar had arrived in Karachi earlier today along with supporters and workers of the PTM group to attend the rally. Dawar said that PPP chief Bilawal Bhutto-Zardari had invited him to attend the public meeting.

Dawar had not attended the first rally of the opposition alliance.

Awami National Party’s Ameer Haider Khan Hoti took the PTI government to task over rising inflation and cost of living. “Imran selected Khan, ask the poor what happens when their electricity bills come, the price of food commodities, how they are buying medicines,” he said.

“I want to ask you where are those 1 crore jobs of yours? You talked about 1 crore jobs and 50 lac houses. And what came of it? Buffaloes, goats, eggs,” he quipped.

The ANP leader went on to say that the PDM’s aim was not to seek an NRO, as has been repeatedly claimed by government minsters, but “to look for solutions to problems such as the economy, the NFC award, protection of the 18th amendment, powers of institutions, protection of the Constitution and most of all the supremacy of parliament.”

Speaking next, Mehmood Khan Achakzai of the Pashtunkhwa Milli Awami Party, said that they (opposition parties) hadn’t come to hurl obscenities at people. “We made the PDM with a lot of thought. This convoy has set out to make a new Pakistan — a Pakistan that was dreamed of by the person whose tomb is nearby.”

Giving a lesson on Pakistan’s history to the charged crowd, Achakzai said that Pakistan was meant to be a fort. “The state was supposed to be a Muslim state, where there would be justice, where power would rest with parliament, where the Constitution would be supreme and people would be independent.”

The PkMAP leader then took a swipe at the government’s accusations regarding the PDM bringing state institutions into disrepute. “We are being told not to talk about institutions. That man is saying this country is safe because our army is strong and is protecting us,” he said. “Do you think the US is being upheld by Trump, Russia by Putin, Germany by that woman? Tt is their army [that is protecting them]? This is not a favour, it is their duty to protect the country,” he said.

Stepping up to the podium next, Balochistan National Party-Mengal’s Akhtar Mengal started off his speech by welcoming the PDM’s leadership to the ‘lane of traitors’. “Traitor certificates for us, the followers of Bacha Khan, were issued in 1947. Our certificates are so old, they are eaten by moths now. Yours are new, so I welcome you,” he quipped, adding that whenever someone comes into power, the opposition and those who struggle for their rights are called traitors.

“After all these rallies, so many supporters of their leaders will be declared traitors. Who will remain a patriot here?” he questioned, before answering himself. “Only those who labelled Mohtarma Fatima Jinnah a traitor, who opposed the reversal of one unit and started movements against it, those who always licked the boots of military dictators.”

The BNP-M leader then questioned why Pakistan was created. “Was this country made for us, or for DHA?” he quipped. “Is it made for those who live in this country or for cantonments, for the public or for the pizza guys?” he continued.

“The other day, a TV channel said that participants of the Gujranwala rally were given qeema naan. I would request Bilawal and Maryam to order Papa John's pizza next time.

“You violate a traffic signal, you are slapped with a challan, break a pot on the street, there will be a case. Have you seen a single case against those who violated the Constitution?” he asked. "Ayub, Zia and Musharraf are called Ghazi, while we are termed traitors,” he lamented.

Maryam arrived in Karachi on Sunday afternoon and was welcomed at the airport by a large number of party workers.

This is her first public appearance in the metropolis. After leaving the airport, Maryam visited the Quaid’s mausoleum to offer fateha. She was accompanied by former Sindh governor and PML-N leader Mohammad Zubair as well as Captain retired Muhammad Safdar, party spokesperson Marriyum Aurangzeb and former premier Shahid Khaqan Abbasi.

Speaking to a private news channel later in the evening as she left her hotel, Maryam said she was "grateful" for the enthusiastic welcome she had received in Karachi.

The PML-N vice president said that PDM's primary aim was to restore the sanctity of the masses' vote which was "stolen" in the 2018 general elections.

"The public is now ahead of us. We (opposition) have gotten late in representing the masses but now we have gathered at the PDM platform," she said.

Former prime minister Nawaz Sharif, however, will not address participants today. In his speech at the Gujranwala public meeting on Friday via video link from London, Nawaz had accused Army Chief Gen Qamar Javed Bajwa and ISI chief Lt Gen Faiz Hameed of being behind his ouster as prime minister and of "bringing Imran Khan into power", among other things.

Hitting back at his political opponents a day after their power show in Gujranwala, a furious Prime Minister Imran Khan declared that he would get “tougher” with them and vowed to start making all-out efforts to bring Nawaz Sharif back to the country and send him behind bars.

About 112 female officials of the special security unit have also been posted in different spots and 284 commandoes of the SSU will be present at the venue.

Since several roads and main thoroughfares have been blocked due to the rally, Karachi police have released alternate traffic routes to facilitate residents.

Furthermore, 159 officials of the Rapid Response Force have also been deployed to provide security.

Addressing the media at the venue, Sindh Murad Ali Shah said that the government had taken all necessary measures to ensure that health guidelines laid out to curb the spread of Covid-19 are observed during the upcoming rally.

Though masks have been made available at the venue, few people were seen wearing them.