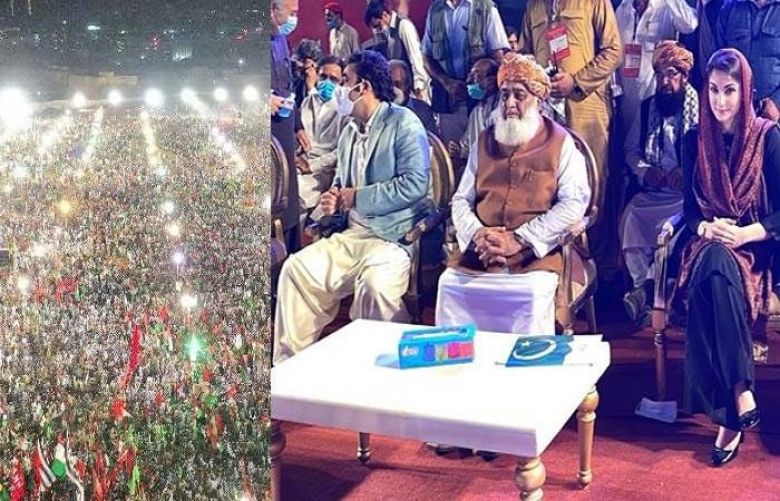 The Pakistan Democratic Movement (PDM) holds its second power show in three days at Bagh-e-Jinnah in Karachi today (Sunday) as it looks to increase the momentum and put the Imran Khan government under pressure.

PPP's Karachi leader Najmi Alam said that arrangements had been made to ensure 50,000 seats were present inside the venue for participants.

The momentum and festivity seem to be increasing as the hours pass with flags of prominent political parties placed inside Bagh-e-Jinnah and banners put up for the PDM's power show.

Special arrangements for lighting and sound system have also made at the venue. Around 1,500 workers of the PPP will volunteer to regulate movement of traffic and ensure participants duly observe the anti-coronavirus precautions.

Different routes have been designated for various processions of different political parties and their leaders to arrive from.

'Not looking towards the umpire'

PPP Chairman Bilawal Bhutto Zardari along with Sindh Chief Minister Syed Murad Ali Shah and Sindh Education and Labour Minister Saeed Ghani visited the venue of the public meeting on Saturday night. The PPP chairman was briefed about the arrangements and preparation for the public meeting.

Lashing out at the government, Bilawal said that the PPP will organise a historic public gathering on October 18 and the PDM will continue the struggle for an independent Pakistan where the judiciary and the media are free.

Bilawal said that the selected government was unable to run the state and the economy. He said that the first public meeting of the PDM in Gujranwala had sent a clear message that the masses were not willing to let off Imran Khan easily for making people's lives miserable.

He said that the selected prime minister had robbed the people by inflation and shortages of wheat and sugar. He said we are not looking towards the ‘Umpire’ but are witnessing the hardships of people who were robbed of their mandate and their fate was handed over to an “incompetent selected leader.”

Reacting to prime minister's remarks about judiciary, Bilawal said the prime minister thinks he can run the judiciary like his Tiger Force. People want indiscriminate justice and want to hear the verdicts against Aleema Baji and the accountability of the K Electric run by the Abraj Group which is the main sponsor of the PTI. He said we wants indiscriminate action against corruption, be it by the judiciary or the generals.

Meanwhile, Bilawal said his struggle for restoration of democracy, supremacy of the Constitution and elected Parliament, protection of basic human rights of the masses would continue despite facing threats from the “selected prime minister”.

“It is time to end the self-centered game of selectors and the selected and empower the electors (people) and the elected (people’s representatives) to save the country and its people from further havoc,” he said while paying glowing tributes to the martyrs of the 'Karsaz Carnage' when peoples' rally welcoming Shaheed Mohtarma Benazir Bhutto upon return from exile was bombed resulting in the martyrdom of 180 PPP workers and injuries to more than 500 others, 13 years ago in Karachi.

Bilawal said all the democratic political parties and their leadership will be gathering in Karachi today (Sunday) to pay tributes to their supreme sacrifices of laying down lives for the cause of democracy during the battle against dictatorship.

Earlier, the Sindh government spokesperson Barrister Murtaza Wahab declared that the Pakistan Democratic Movement's rally in Karachi will be a public referendum, saying the case of 220mn Pakistanis will be fought on streets.