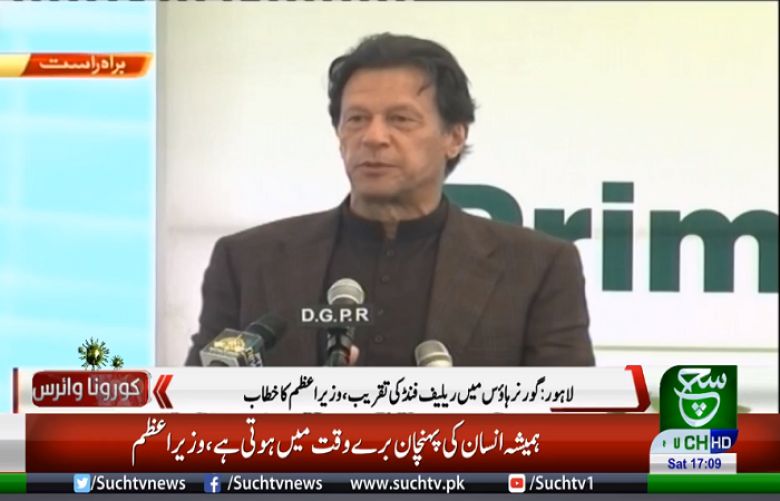 Prime Minister Imran Khan on Saturday said that the government has announced one of the biggest relief package of the country’s history and they would further continue their support with the help of donations from philanthropists.

“On one hand we will be adopting all measures to fight coronavirus and on the other, we will continue to take measures aimed at running the economy so that poor segments of the society do not get affected from the ongoing situation,” said the premier while addressing a fundraising event at Governor House Punjab for Prime Minister Relief Fund for COVID-19.

“We have allowed the construction sector to operate during the lockdown and are mulling on a daily basis as to which other industry could be allowed to operate ensuring proper preventive measures,” he said.

The prime minister expressed his gratitude towards philanthropists for giving away large sums of donations to the fund.

“It is a test for the nation to pass through this difficult phase with courage and supporting each other,” he said adding that even the countries having better infrastructure and modern equipment were facing difficulties to battle against the virus.

He lauded the sports and showbiz celebrities for carrying out charity works in the country.

Khan said that he considers it a challenge for him to lead the nation during that difficult time and if succeeded in overcoming it, they would come out as further strengthened.

He said that it was unfortunate that they have forgot the ideology on which the country was founded and the religion was only used for politics and other means rather than learning a lesson to move forward.

“We have to adopt the same principles on which the first Islamic state was founded in Medinah,” he said adding that everyone should support one and other to pass through that difficult time.

Imran Khan said that the government has announced one of the biggest relief package of the country’s history and they would further continue their support with the help of donations from philanthropists.

“We will be announcing more relief packages for the poor,” he said.

The prime minister spoke against downplaying the coronavirus threat and said that it was not an option for them as although the country has not been badly affected from the virus but still, the situation could turn worst if preventive measures were not adopted.

“We will be putting all virus-hit areas in the country under complete lockdown,” he said adding that the tiger force established by the government would help them in carrying out activities to fight the virus as war against it would last for long in the country.

He said that they would be providing cash to the needy families without any discrimination and would verify data of the families using tiger force volunteers.

The prime minister also asked the federal and provincial lawmakers to go out in their constituencies and serve the masses as it was the real politics.