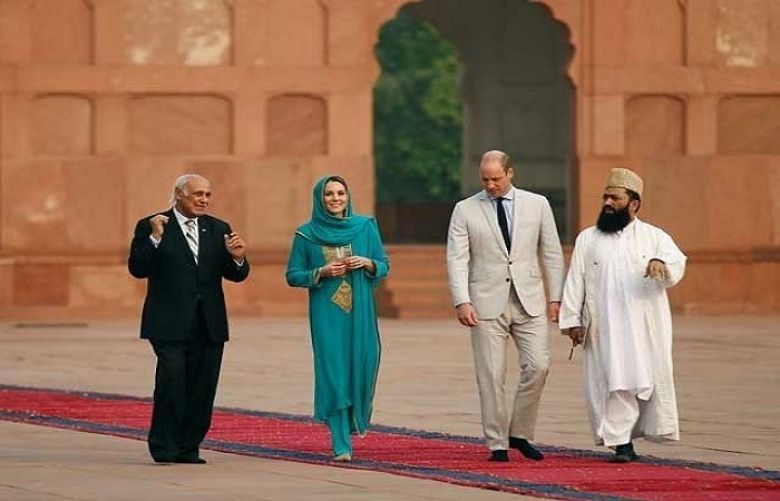 The Duke and Duchess of Cambridge will spend a busy day in Pakistan’s cultural capital, Lahore on Thursday, attending multiple events in the city.

Upon their arrival in Lahore, Prince William and Kate Middleton met with Punjab Governor Chaudhry Mohammad Sarwar and Chief Minister Usman Buzdar, before proceeding to a charity function.

For her visit to Lahore, Kate donned a white Gul Ahmed shalwar kameez and a shawl by Maheem Khan.

She accessorised her ensemble with a clutch from Mulberry, shoes by Gianvito Rossi and earrings by Asprey.

Punjab Chief Minister Buzdar during the meeting said Pakistan and UK were moving ahead together in journey of progress and prosperity.

He added the visit will further strengthen bilateral ties between Pakistan and United Kingdom.

After their formal meeting with the Punjab chief minister and governor, the royal couple travelled to SOS Children Village where they meet orphaned children.

Here is another tweet from the Kensington Palace on the royal couple's visit to the SOS village.

The Duke and Duchess next visited the National Cricket Academy, where they were welcomed by Pakistan Cricket Board (PCB) Chairman Ehsan Mani, PCB Chief Executive Wasim Khan and other officials.

The last engagement for the royals in the city is a visit to Shaukat Khanum Hospital built by Prime Minister Imran Khan in memory of his late mother who died from cancer in 1985.

In 1996, the late Princess Diana visited the hospital accompanied by PM Imran and his former wife, Jemima Goldsmith, a close friend of the royal.