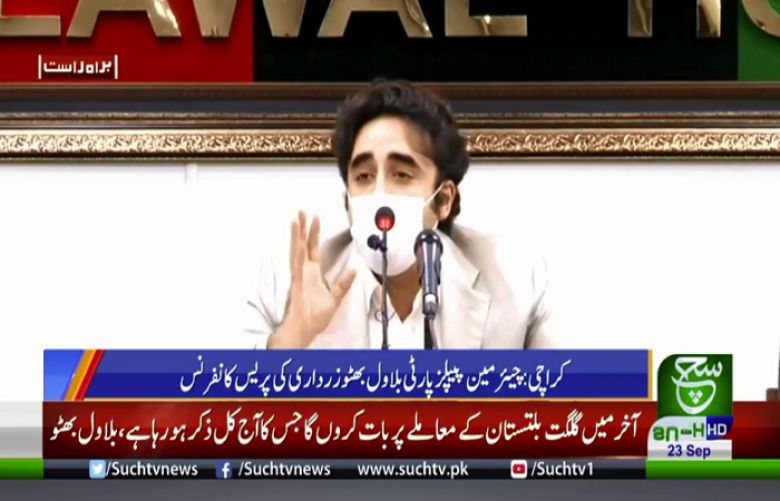 The PPP leader revealed this during a news conference, where he spoke about the recent meeting between the military and political leadership to discuss administrative matters pertaining to Gilgit-Baltistan.

Bilawal came down hard on "some irresponsible people" who were part of the meeting, for discussing sensitive matters relating to national security issues and foreign policy issues on TV.

"Whoever's spokesperson these people are, that person should tell them to be quiet at once," said the PPP chairman. "And refrain from issuing any irresponsible statements."

Bilawal said that it was necessary for political parties to attend meetings on national security matters. He criticised Prime Minister Imran Khan for "failing to engage the opposition" on such important issues pertaining to national security.

"This prime minister, since day one, has completely failed when it comes to national security issues, including those of Gilgit Baltistan and Kashmir," he said, accusing the prime minister of not being mature enough to set aside his ego to talk to the opposition.

"Due to this, national security meetings are being held without the prime minister, which should not have happened," said Bilawal, adding that this was a "failing of the government. "It is the responsibility of the prime minister, considering the chair that he occupies, to talk to the opposition."

He called on PM Imran to resign and hand over the job of leading the country to a prime minister "who takes his responsibilities seriously and doesn't think about his personal politics on every other matter".

Speaking about the national security meeting between the civil and military leadership, Bilawal regretted that there was no representative of the people of Gilgit-Baltistan in the meeting. He said that transparent elections were the need of the hour for the area.

"There is no bigger threat to national security than elections that are not free and transparent," he said.

Terming it as a "welcome development", Bilawal said that army chief Gen Bajwa is also in favour of free and transparent elections in Gilgit-Baltistan.

"Even if we have differences over the past elections, I got an impression in this meeting that going forward from here, our army chief wants that future elections do not become controversial," he said, calling on political parties to carry out reforms through which holding transparent polls was possible.

In response to a question, the PPP chairman ruled out any discussion between the army leadership and the country's political leadership on any amendments or laws.

"The reason for the army chief to engage with the political leadership of the country was to discuss the overall situation, the overall environment of that region [Gilgit-Baltistan]," said Bilawal. "Would have been better if Prime Minister Imran Khan would have been there.

Answering another question, Bilawal said that the party did not agree with the military leadership on elections 2018 but going forward, expected that transparent elections will be held.

"Gilgit-Baltistan [election] is an opportunity after which if all political parties conduct electoral reforms in parliament and if we contest next elections on these reforms, I think this issue will be solved," he said.