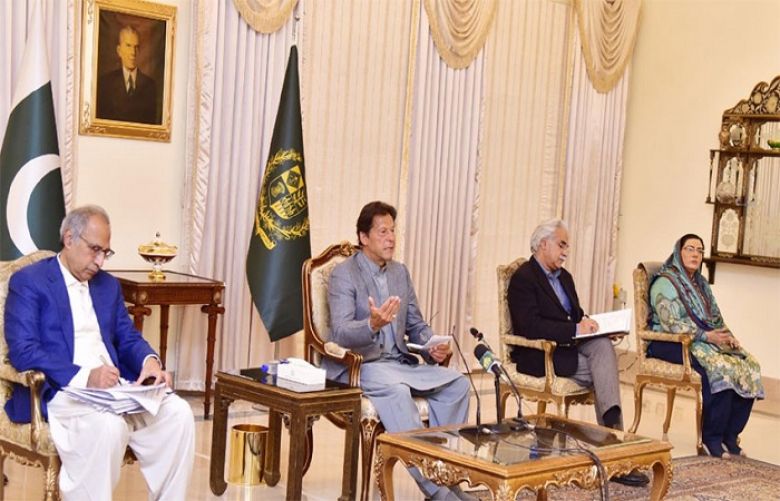 Prime Minister Imran Khan has urged the nation to adopt social distancing as a precautionary measure against the threat of coronavirus pandemic.

Talking to senior journalists in Islamabad on Friday, he said it is very important that people who show symptoms of coronavirus must self-quarantine them. He said the people should also limit their social gatherings for the next one or two months.

The Prime Minister said the situation is being monitored and tracked on daily basis to gauge its impacts. He said experiences of various countries, especially China, will be utilized to tackle the menace of coronavirus.

Imran Khan said the government is fully alert and vibrant to the threat and it has been decided that all federal ministers will be available in Islamabad during this crisis and there will not be any leave of them.

He said he will update the people about the coronavirus situation twice a week. He said no information will be withheld from people, so that prompt action can be taken.

Dispelling the negative impression created by some media channels on steps taken by federal government in the wake of coronavirus, the Prime Minister said the government was in constant contact with the Chinese government when the cases of virus first emerged in their country. Later, when the cases were traced in Iran, we also started communicating with Tehran regarding the situation.

He said Special Assistant on Health Dr. Zafar Mirza visited Taftan area to witness the situation first-hand. As a result, a lot of measures were adopted for better screening of patients of coronavirus in collaboration with army and civilian authorities. He said it is not right to blame anyone in this crisis.

The Prime Minister urged the international community to lift sanctions from Iran as they are dealing with this situation despite having limited resources and medical facilities.

Imran Khan said if the cases spike in Pakistan, four to five percent people may need hospitalization which will put a strain on available medical resources. He said even in advanced countries like Italy, the situation is becoming critical due to shortage of medical supplies.

He said role of media is very important in this situation as sensationalism could lead to panic that might make the situation worse. He referred to the example of panic in some Western countries where people are rushing towards grocery stores and emptying the shelves of stuff.

The Prime Minister said we have to strike balance between gathering of people and the safety of their livelihoods. He said we are going to provide incentives to construction industry to create employment opportunities. He said we want people to exercise discipline, rather than lock downing the whole cities.

Imran Khan said work is underway on creating a financial package that will be announced on Tuesday next. He said all stakeholders, including State Bank of Pakistan, Ministry of Finance and FBR are involved in the preparation of this package to provide incentives.

Interacting with senior journalists in Islamabad this evening, he said an update will be shared with the provinces on daily basis.

He underscored the vital and responsible role of the media in creating awareness and preventing panic among masses. He urged media not to share personal data of patients.

Speaking on the occasion, Advisor on Finance Dr. Abdul Hafeez Shaikh said the government is working on a joint strategy to bring a stimulus package for the areas of economy being hurt due to coronavirus.

He said the economic indicators of the country were showing progress before the eruption of coronavirus. He said as the global economy is slowing down due to the global pandemic, our exports are also likely to be impacted. It could also reduce the foreign remittances received by the country, besides plummeting the job creation opportunities.

Dr Abdul Hafeez Shaikh said a survey is being conducted to understand which industries are hurting the most in this crisis. He said as part of stimulus measures, taxes will be reduced on certain products while subsidies will be given on others.

The Advisor said every effort will be made that relief worth 280 billion rupees to farmers is not disturbed. He said disbursements under Ehsaas program will be accelerated so that vulnerable segments of the society are not impacted by the corona threat.