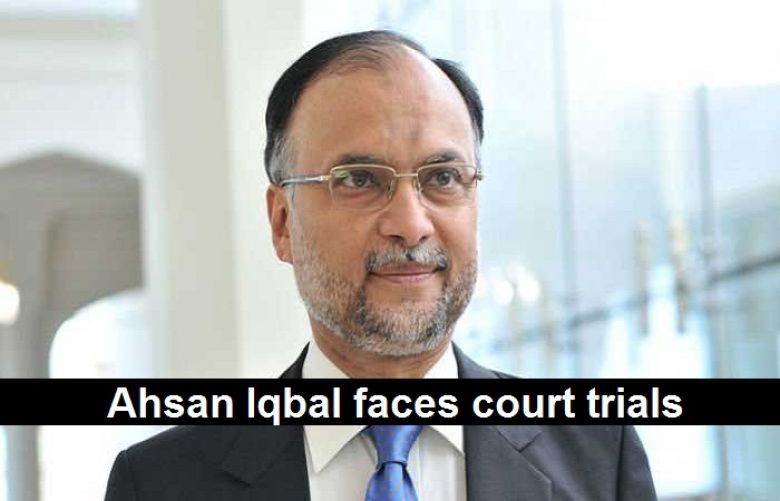 The National Accountability Bureau (NAB) has produced Pakistan Muslim League Nawaz (PML-N) central leader Ahsan Iqbal before an accountability court where he will face the trial of corruption charges against him in Narowal Sports City case.

The PML-N’s former planning minister Ahsan Iqbal had been taken into custody by the anti-corruption watchdog on Monday (yesterday) in Narowal Sports City corruption case.

The anti-corruption watchdog will seek physical remand of the PML-N leader in today’s hearing.

NAB sources told ARY News that the politician is facing charges of misusing powers as he had illegally increased the construction cost of the sports city project from Rs300 million to Rs1000 million in accordance with the records scrutinised by NAB.

It is revealed that the Central Development Working Party (CDWP) had not been contacted for getting formal permission before hiking the cost.

The project was handed over to the province in 2012 under 18th Constitutional Amendment and Rs2000 million funds were released over recommendations of Iqbal but Ministry of Inter-Provincial Coordination had not issued any directions regarding the project.

Sources added that the accused politician had intervened into a provincial project by misusing his authorities, whereas, the construction cost was increased up to Rs3 billion after reviewing PC-1.

The anti-graft watchdog’s sources said that the evidences have proved the involvement of Ahsan Iqbal into the alleged financial irregularities. The officials also expressed suspicions for changes in records by the politician in the case.

Ahsan Iqbal, while interacting with the journalists upon his arrival at the court’s premises, claimed that he had fulfilled his promises with Narowal citizen and he is loyal to his political party and its supremo Nawaz Sharif. The politician added he had been charged with Rs6 billion corruption in the project which worths around Rs2.5 billion.