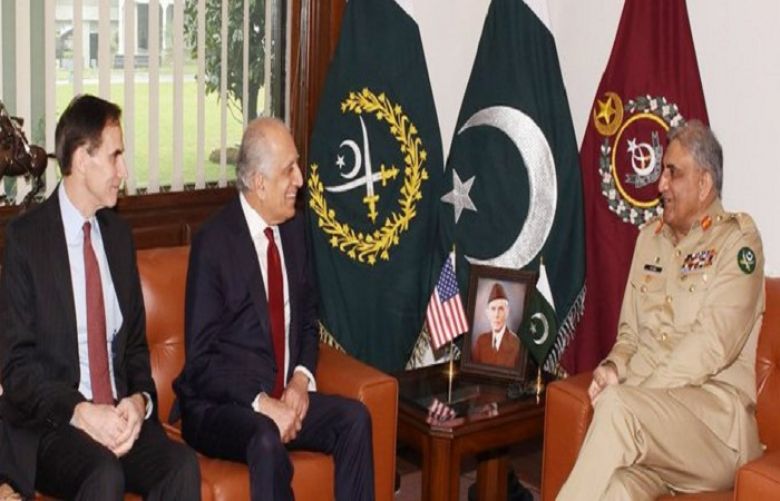 According to the Army spokesperson, Khalilzad, Gen Bajwa, and the United States' ambassador to Pakistan, Paul Wayne Jones, discussed regional security and exchanged thoughts on the Afghan peace process.

Khalilzad, the US Special Representative for Afghanistan Reconciliation, had arrived here in Pakistan earlier today from Qatar's capital, Doha, and was escorted from Islamabad International Airport (IIAP) under special security arrangements.

After his arrival, the US envoy met FM Qureshi and discussed the Afghan reconciliation process with him. According to the Foreign Office, the two also talked about the overall situation of the regional peace and stability.

The minister, in this regard, noted that Pakistan was of the viewpoint from day one that the use of power was not the solution to the Afghan peace process. Islamabad expected the US-Taliban talks to resume soon, he added.

Qureshi also underscored that the regional peace and stability was closely linked to peace in Kabul and that Pakistan would continue to play its reconciliatory role in the Afghan peace process as part of collective responsibility.

Khalilzad, on the other, apprised the minister on the delegation-level talks between the US and Afghan Taliban. He also lauded Pakistan's role in the Afghan peace process.