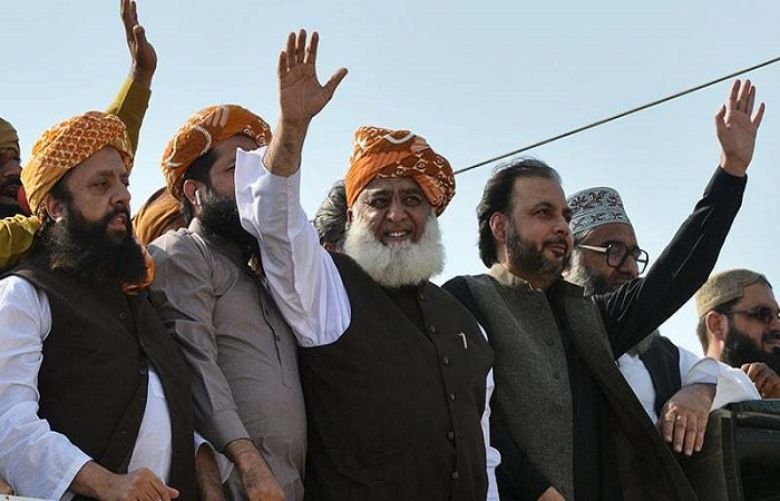 Jamiat Ulema-e-Islam-F Chief Maulana Fazl-ur-Rehman said on Friday that the Azadi March sit-in is not for 'spectators' but for resolute ones.

The JUI-F chief was addressing the gathering in the federal capital, where he lauded the resilience of the Azadi March participants for bracing rain and cold weather.

Maulana Fazl addressed the participants of the sit-in in evening, saying that further time cannot be given to the government as it can lead to 'further deterioration in the country's situation'.

Fazl said that people could not get justice in Pakistan. "There is no justice in the country. NAB is helpless when it comes to holding the government responsible in Pakistan," he said.

Fazl said that he and the Azadi Marchers had arrived in Islamabad to save the country and that is what they will do.

"If these unqualified people present the next budget, then God forbid, the country will collapse," he said.

At the start of the address, Fazl lauded the workers for bracing rain and cold weather with sheer resilience.

“This gathering is for those who stand firmly behind their stance,” said Fazl to the crowd.

He said that the sit-in is not for 'spectators' but for the resolute ones.

On Tuesday night, a picture of a few Azadi Marchers preparing to go to sleep in the biting cold and rain went viral on social media. Protesters were seen in the picture sleeping on mattresses laid on the ground, with blankets and plastic coverings draped over them to keep away the cold.

Following which, Prime Minister Imran Khan said that he had directed the CDA Chairman to immediately visit the dharna site to assess what relief and assistance can be provided to the dharna participants.

Shortly after the directives of Prime Minister Imran Khan, relief and assistance teams reached the venue of the Azadi March sit-in to give medical assistance to protesters.