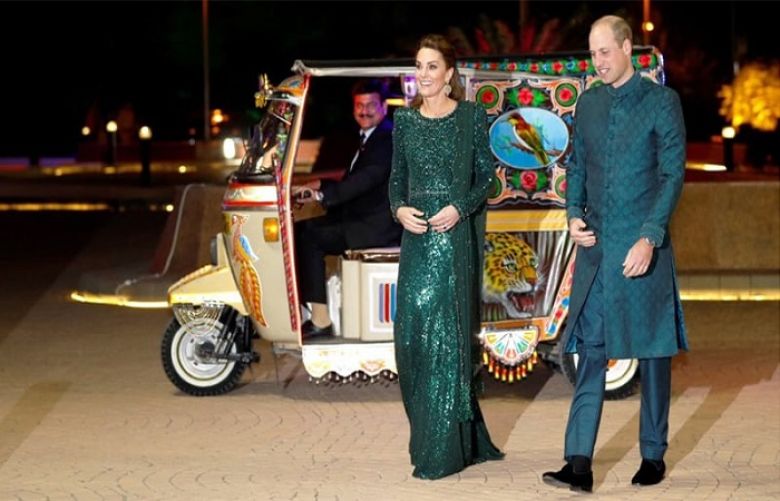 Prince William and Kate Middleton, the Duke and Duchess of Cambridge, are attending a reception hosted by the British High Commissioner to Pakistan Thomas Drew at the Pakistan National Monument in Islamabad.

The royal couple arrived at the venue in style in a rickshaw decked out in traditional truck art.

William was seen wearing traditional attire for the first time since his arrival — a teal sherwani by Naushemian — while Kate wore a green embellished Jenny Packham gown, according to Daily Mail Royal Correspondent Rebecca English.

Kate's earrings — gold plated with uncut crystal stones — belong to the popular London brand O'nitaa, and were sourced from Pakistan, said the correspondent. They were "bespoked specially for the Duchess of Cambridge", she added.

VIDEO: The Duke and Duchess of Cambridge arriving at Islamabad’s Pakistan Monument in a traditional rickshaw ... ? pic.twitter.com/8Tq1tR4yj5

The National Monument has been lit up for the reception.

Prince William addressed the event, speaking about issues such as education for girls and climate change. He called for Britain and Pakistan to continue to work together in these areas.

Somewhere down there William and Kate are mingling with the good and the great of Pakistan society - and what a stunning backdrop...... pic.twitter.com/bLlp7ZNZkx

Earlier in the day, the royal couple met President Alvi and his wife Samina Arif at the Aiwan-i-Sadr.

Following the meeting with the president, the couple called on Prime Minister Imran Khan at the Prime Minister House where a lunch was hosted in their honour.

Part of the day's activities also included a visit to Islamabad Model College for Girls as well as a trip to Trail 5, Margalla Hills to attend an event regarding environmental protection.

The Duke and Duchess of Cambridge had arrived in Pakistan on Monday night. They were accorded a red carpet welcome at the Nur Khan air base where they were received by Foreign Minister Shah Mahmood Qureshi and his wife Mehriene Qureshi.