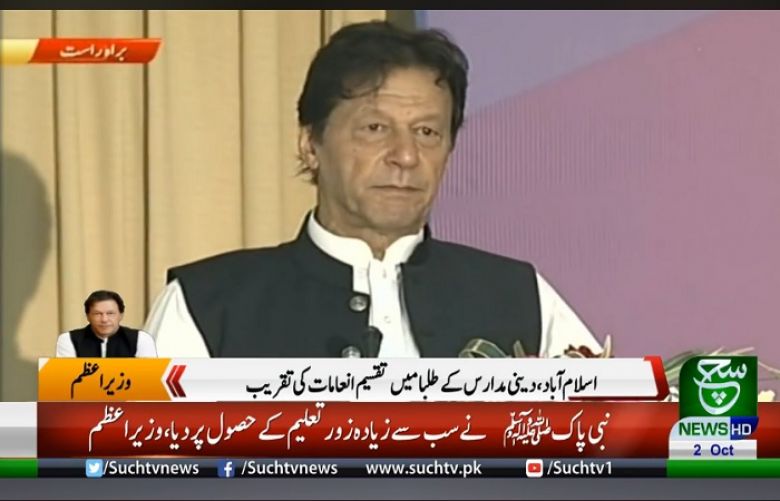 He was addressing a prize distribution ceremony for the Madrassa students, who performed distinctively in the exams of contemporary education boards and religious seminaries, in Islamabad on Wednesday.

The Prime Minister said reforms are being introduced in the education system, which will help uplift the lower strata of the society with the provision of equal opportunities to progress.

He said a uniform curriculum is being designed so that all the graduates have equal opportunities to grow in their practical life. He said the graduates of the new education system will have understanding of religion, contemporary knowledge and science and technology.

Imran Khan said at present, three education systems are being practiced, which are leading to injustices and divisions in the society.

He said the PTI government had decided in its early days that the students of religious seminaries will be imparted contemporary modern education so that they too can get important positions in different professions.

Underlining importance of education, the Prime Minister said Islam has laid special emphasis on education. He said Muslims are weak today mainly due to lack of education.

He said eight million Kashmiris have been locked in occupied Kashmir in an open jail for two months.

The Prime Minister said Pakistan, Malaysia and Turkey have decided to launch an English language channel to present Muslims' stance to the world and project the Muslim history.

He said the three Muslim countries have also decided to collaborate to make films on Muslim history and heroes of Islam.

Speaking on the occasion, Minister for Education Shafqat Mahmood said the PTI government has been working on various initiatives to eliminate injustice in the society on the basis of education.

He said a uniform curriculum is being prepared for the government and private schools as well as Madrassas, and primary level curriculum will be prepared by March next year.

He said measures are also being taken to ensure that students of religious seminaries take examinations of contemporary education boards, and this process will hopefully be completed in three to four years.

The Prime Minister also distributed awards among position holders of seminary students and congratulated them for their future endeavours.