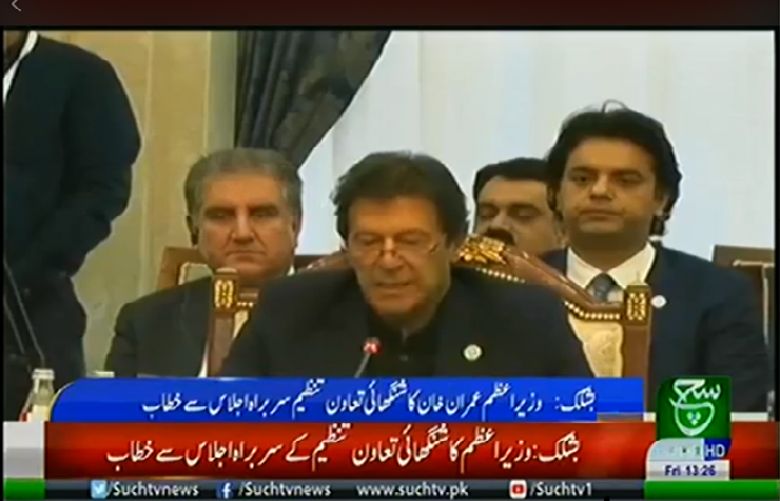 Addressing the Shanghai club, the prime minister urged the SCO to play its role in curbing corruption, for which he stressed to develop a strong framework.

He further called for SCO’s support for resolving Afghanistan conflict. “We deem this to part of shared reasonability and therefore, appreciate the positive contributions being made by China, Russia and Afghanistan’s immediate neighbours,” he said.

Referring to the evolving crisis in Gulf and the Middle East, PM Imran said, “We join the SCO members in urging the parties to exercise restraint, take steps to deescalate the situation and find a solution through diplomatic means.”

Talking about trade and innovation, he said, “We build partnerships based on mutual respect, sovereign equality and equal benefit. The China Pakistan Economic Corridor (CPEC), the flagship project of president XI’s far-sighted Belt and Road Initiative, is fast reaching fruition. In time, CPEC is destined to catalyze the creation of an integrated pan-Asian sphere of shared prosperity.”

Khan also suggested establishing the SCO cultural and tourism corridor for improving mutual contacts between the member countries of the club.

In the fields of food security and health, the cooperation among member countries should pace up, PM Khan continued.

“Make SCO more relevant to the daily lives of citizens by promoting food security and enhancing cooperation in health and humanitarian sectors. Take the lead role in establishing a comprehensive framework for combating corruption and white collar crime,” he said.

Highlighting the achievements of Pakistan against the war on terror, he said: “our country is a part of the anti-terrorism program of the SCO and Pakistan remains ready to share its expertise to counter-terrorism.”

Yesterday, the Pakistani premier flew to Bishkek on the invitation of Kyrgyz President Sooronbay Jeenbekov to attend the 19th meeting of the Council of the Heads of State of the Shanghai Cooperation Organization.