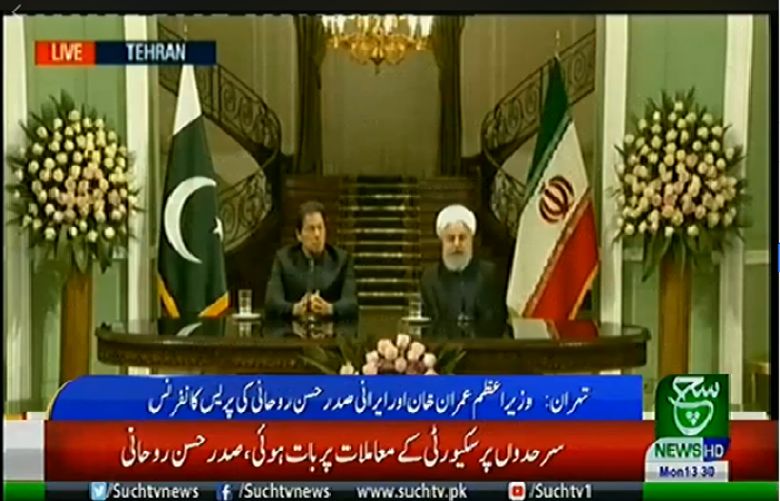 "We agreed to create a joint rapid reaction force at the borders for combating terrorism," Rouhani said, following months of increased tensions over attacks on both sides of the two countries' frontier.

Addressing a joint press conference with Rouhani, Prime Minister Imran Khan, who is on his maiden official two-day visit to Iran, said Pakistan has resolved not to allow any militant group to operate from its soil.

"We have been facing [impact] of terrorism since long. In Pakistan, we have suffered more terrorism than probably any other country. In the past [few years] we have lost around 70,000 people. Full appreciation must be made for our security agencies, with the way they tackled terrorism in Pakistan," the premier said.

"I felt that the issue of terrorism was going to increase differences between Pakistan and Iran. So it's very important that we [resolve] this issue," PM Imran added.

The two leaders discussed bilateral relations, regional issues and ways and means to further bolster their relations in diverse fields.

Prime Minister Imran, who is in Iran on a two-day official visit, was earlier presented with an official welcome upon his arrival at the Saadabad Palace.
The premier will also call on Iran's Supreme Leader Ayatollah Seyyed Ali Khamenei, and meet Pakistani and Iranian business community during the visit.

The prime minister landed at the Tehran International Airport on Sunday, where he was warmly welcomed by Iranian Health Minister Dr Saeed Namaki. A smartly turned out contingent also presented him a static salute.

Earlier, the premier arrived in Mashhad for a brief stop-over on his way to Tehran, where he visited the shrine of Hazrat Imam Raza and offered dua and nawafil.

On Saturday, Foreign Minister Shah Mehmood Qureshi said Islamabad had evidence the "terrorist outfits" that carried out the attack have "training and logistic camps inside Iranian areas bordering Pakistan".