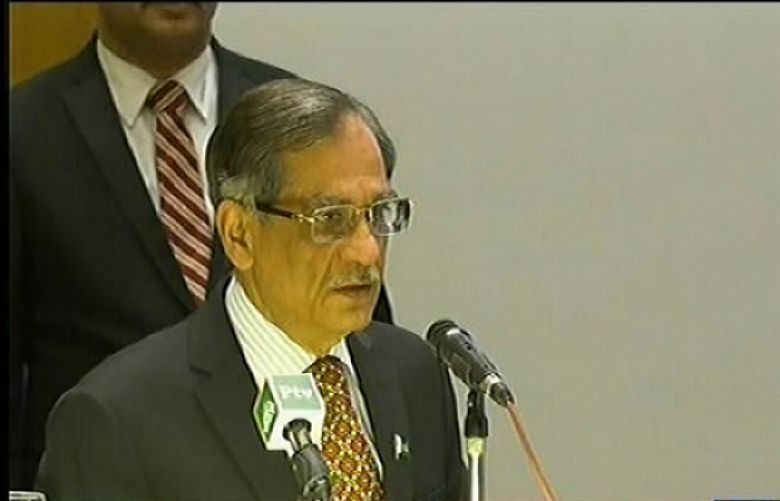 Chief Justice of Pakistan Mian Saqb Nisar on Friday regretted that the matter of Nai Gaj Dam's construction may not be resolved within his tenure.

"I had hoped that this matter would be resolved during my tenure. However, some wishes just remain wishes," said the chief justice, who is set to retire on January 17.

"There is still a week left," remarked Justice Ijazul Ahsan, the other member of the two-judge bench hearing the petition seeking directive from the top court for the allocation of sufficient funds to complete the dam’s construction as early as possible.

Additional Attorney General Sajid Ilyas told the bench that the Central Development Working Party (CDWP) during a meeting forwarded the proposal for the dam's construction to the Economic Coordination Committee (ECC).

Expressing his disappointment, the chief justice said that the matter will now be stuck with the ECC.

The bench then summoned Minister for Power Omar Ayub Khan, Minister for Finance Asad Umar and cabinet secretary to appear before the court in the next hearing of the case, which has been set for Tuesday, January 15.

Nai Gaj is a hill torrent which emanates from Khuzdar district of Balochistan and after passing through plains of Kutch it eventually enters Manchar lake. The Nai Gaj area remains dry for eight months and gets water in four months during monsoon season. After Manchar lake attains its peak level and no more remains in a position to receive water in monsoon season, water flows from Nai Gaj often devastate flood-protection bunds and inundate agricultural lands.

After inundating agricultural lands and devastating houses and standing crops, the monsoon water falls into the sea and, as such, a huge amount of water is wasted, says the petition.

Apart from serving as continuous flow of fresh water to Manchar lake, which will improve the ecology of the lake, the Nai Gaj Dam will also serve as a lifeline for the people of this mountainous region in Dadu district with the potential of changing their socio-economic conditions.

The petition also highlights that construction of the dam is blocking the inflow of a huge quantity of fresh water to Manchar lake. For improving the situation, Wapda has proposed 50 cusecs of continued piped water supply to the lake from the dam.