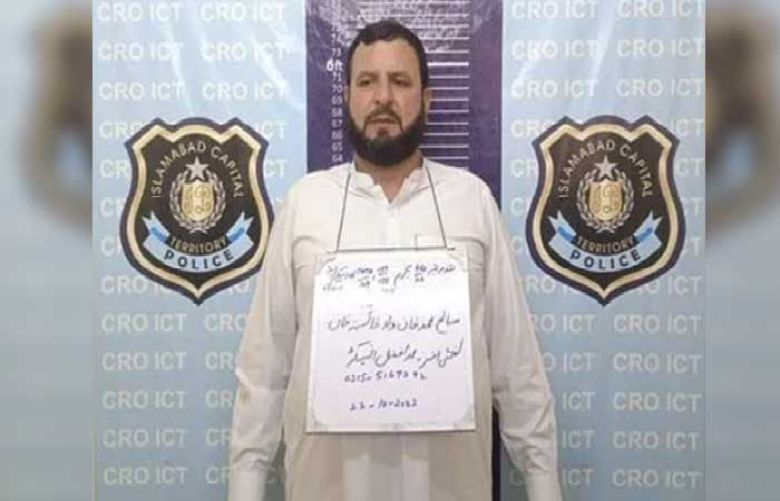 The Islamabad Capital Territory (ICT) police on Saturday suspended two of its officials, including the crime record officer, for ridiculing PTI MNA Saleh Muhammad Khan at Secretariat police station in the federal capital.

According to media reports the police officials photographed the arrested PTI lawmaker Saleh Muhammad Khan Swati with a slate, inscribed with the detainee’s details, around his neck, and then released the pictures on social media.

The picture went viral and drew condemnation from PTI leaders and activists.

People on social media largely expressed their disapproval of such humiliating behaviour of the Islamabad police.

According to police, a probe has been launched into the incident.

It should be noted that the police had taken into custody Saleh and his two security guards from Khyber Pakhtunkhwa police, under terrorism charges for allegedly shooting at the police contingent deployed outside the Election Commission of Pakistan (ECP).

Saleh, who comes from Mansehra, was booked on the charges of attempted murder, violation of Section 144, and abutment.

In an FIR registered at the Secretariat police station, SHO Ashfaq Ahmed claimed Saleh along with his gunmen was shouting slogans against the verdict of the ECP announced after 2:15pm and also tried to disrupt the law-and-order situation.

Saleh was arrested after PML-N leader Mohsin Shawnawz alleged that his gunmen opened fire to wound him fatally.