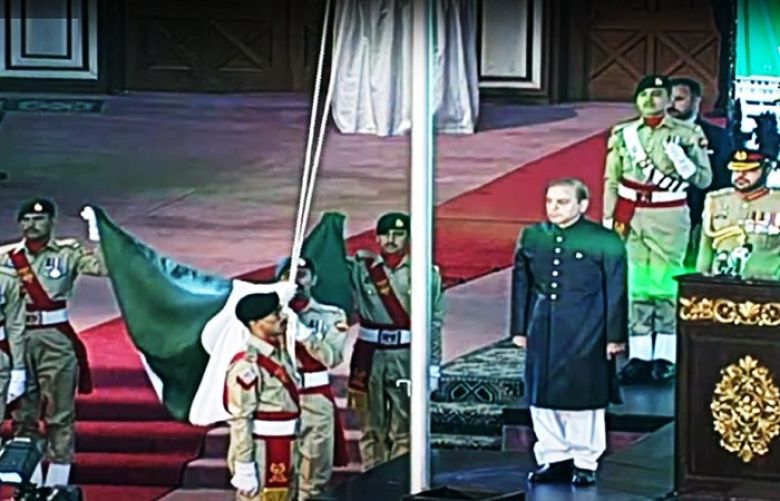 On the occasion of Pakistan's diamond jubilee celebrations, Prime Minister Shehbaz Sharif has renewed the pledge to take to the country to new heights of glory.

Addressing the main flag hoisting ceremony in Islamabad today, he urged the nation to play its role for the development of the country by following the golden principles of our great leader Quaid-i-Azam including unity, faith and discipline.

Congratulating the 75th anniversary of Pakistan's independence to the nation, the Prime Minister prayed for the independence of Muslims in Indian Illegally Occupied Jammu and Kashmir and Palestine.

The Prime Minister paid tribute to the people who sacrificed their lives in freedom movement and all those who played their role in country's development.

Acknowledging the services of civil society for country's development, the Prime Minister paid rich tribute to Abdul Sattar Edhi and Ruth Pfau for their exceptional work.

The Prime Minister also paid tribute to all those who made country's defense indispensable by making it a nuclear power including Zulfiqar Ali Bhutto who initiated Pakistan's nuclear program, Mian Muhammad Nawaz Sharif who accomplished it successfully and Armed Forces for playing key role.

The Prime Minister also paid tribute to the people and departments which played their role for the re-recording of national anthem including ISPR and Ministry of Information and Broadcasting.

Recalling the sacrifices of freedom movement heroes, the Prime Minister said dedication can never be defeated, therefore, as a nation we should pledge to take collective measures for the development of the country. He said we should identify the mistakes of past with the commitment of not repeating those again.

The Prime Minister said youth has always been our priority and we will provide every opportunity to it as country's future belongs to them. He urged country's youth to obey Quaid-i-Azam's sayings for making Pakistan's future bright.