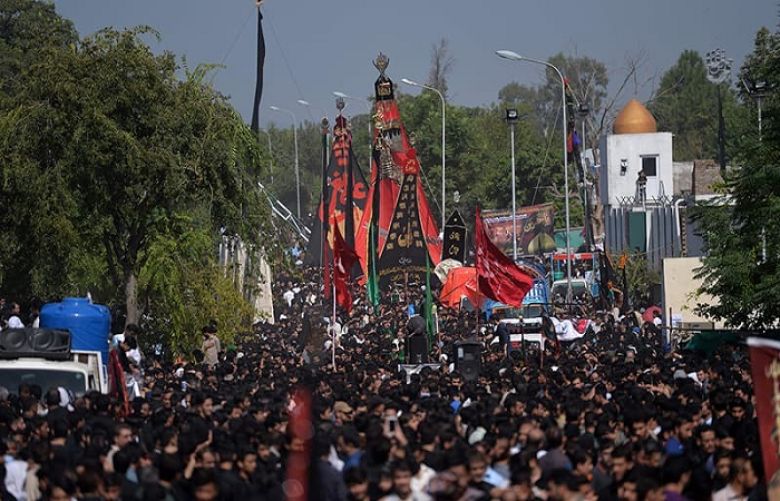 Mourners across the country took out processions on Tuesday to observe Yaum-i-Ashura amid tight security arrangements and with cellular services suspended in several areas.

Yaum-i-Ashura is observed every year on Muharram 10 with solemnity to pay homage to Imam Hussain and other martyrs of Karbala.

Strict security measures were taken to ensure the safe passage of processions in the major cities. Mobile phone services had remained suspended for the third consecutive day as part of the security measures, however, they started reopening after 6pm.

Later in the evening, Interior Minister Rana Sanaullah, in a press conference, said that not a single untoward incident had occurred during the first 10 days of Muharram.

He lauded the security institutions for playing a "seminal role for ensuring peace during the mourning processions and majalis".

Separately, Prime Minister Shehbaz Sharif also congratulated Sanaullah and all the security forces for protecting the lives and property of the people during the last three days.

"This day has been completed peacefully due to your team work," he said in a statement issued by the PM

The main procession in Karachi, which was taken out from Nishtar Park at 9:00am, culminated at Hussainian Iranian Imambargah after passing along MA Jinnah Road, according to a press release issued by traffic police.

In Karachi and other major cities of Sindh, more than 55,000 police and Rangers personnel have been deployed for the security of mourning processions and mobile phone and internet services are to remain suspended under a comprehensive security plan for Ashura.

After the processions culminated, Chief Minister Sindh Syed Murad Ali Shah, in a statement available with Dawn.com, lauded the police, Rangers and other law enforcement agencies for successfully fulfilling their responsibilities.

He also thanked the doctors and paramedic staff for providing their services to the participants of the processions.