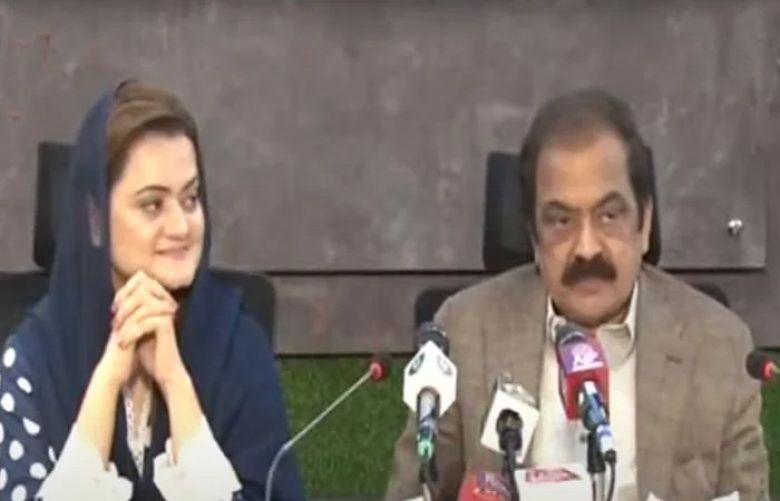 Following senior PTI leader Shahbaz Gill’s arrest, Interior Minister Rana Sanaullah Tuesday said that his comments — on the basis of which he has been taken into custody — were a part of the planned conspiracy to create division within the military.

Addressing a press conference flanked by Information Minister Marriyum Aurangzeb, the interior minister said that the comments were according to the script prepared under the supervision of PTI Chairperson Imran Khan which was carried forward by former information minister Fawad Chaudhry and Gill.

Earlier today, Khan's aide Gill was taken into custody for inciting the public against the state institutions, a spokesperson of the Islamabad police confirmed.

Sanaullah stated that Gill has been arrested by the Islamabad police “in accordance with the law” on charges of sedition and inciting the public against the state institutions which has been registered in Kohsar Police Station.

The interior minister stated that the first information report (FIR) has been registered on behalf of the state and the PTI leader will be presented before the court tomorrow morning.

Sharing the details, Sanaullah said that the case was registered at a magistrate’s complaint under the following sections of the Pakistan Penal Code:

“Khan is working on a narrative after realising that he had been trapped in the foreign funding and Toshakhana reference,” the interior minister said, adding that this conspiracy was plotted to divert public attention from their [PTI] wrongdoings.

Referring to Khan’s statement regarding this being an abduction, the federal minister said that a case has been registered against Gill “how can this be abduction?”

“I assure Khan and [Fawad] Chaudhry that all action against them will be taken according to the law,” he said, adding that a “fair and transparent investigation” will be conducted and a team had been formed.

Sanaullah went on to say that “hateful and seditious” remarks made by Gill were in line with the conspiracy in which a private news channel was also involved.

“Inquiry will be held regarding who are people behind Gill and the private channel as no further investigation is needed on Gill’s statement,” he said, adding that those involved from the private TV channel will eventually come to the limelight.

“The sentences that were said are such that I think it is not in the national interest to repeat them,” he stated, claiming that the PTI leader went to the extent of “leading people towards rebellion” and “inciting mutiny and sedition within the institution”.

The interior minister further stated that the incident proves that the PTI was responsible for running a negative social media campaign on the tragic incident of an army helicopter crash amid a flood relief operation in Balochistan.