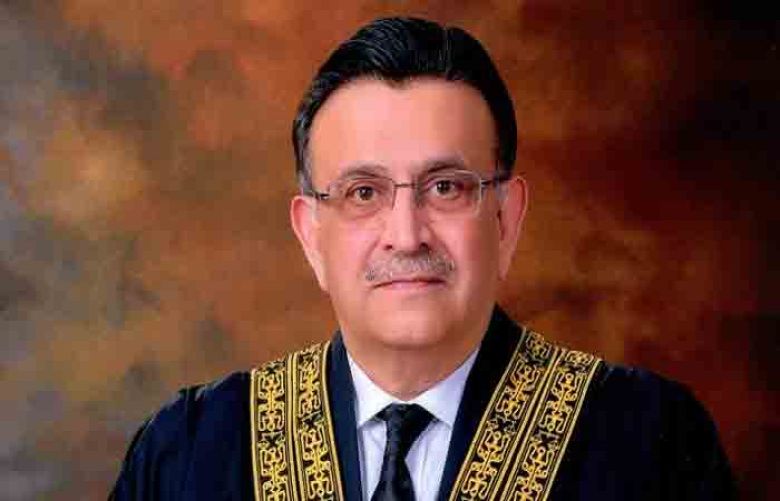 Chief Justice Umar Ata Bandial on Tuesday said the Supreme Court would not let any institutions transgress their mandate while observing that the executive (federal government) needed to use its powers in light of the Constitution and law.

The chief justice is heading a five-member bench over alleged interference of the federal government in high-profile cases pertaining to the premier and other ministers.

The CJ had taken a suo motu notice and formed a five-strong bench to settle the issue, especially the recent amendments in the ECL rules by the Shehbaz-led cabinet.

During the hearing today, Justice Bandial said the current circumstances were “extraordinary” in nature as the political party that had held a majority in parliament has resigned en masse. He said Pakistan was facing an economic crisis as well.

Justice Bandial said the court would not let anyone take advantage of the current situation and added that “[even] one-sided parliament should legislate as per the legal requirements”.

“In order for the system to function we all need to work together,” Justice Bandial said, adding that the court would keep a “close watch” to stop transgressions by any institution. He added that the top court did not want to issue a ruling that would create hurdles for the government.

During the hearing, Justice Munib Akhtar asked if there was a legal reason behind the removal of the names from the ECL.

Justice Ijazul Ahsan asked why did the government act so fast to remove the names.

The additional attorney general said that the names of the cabinet members were on the ECL and added that similar practices had been prevalent in the past as well.

“Is this the reply of the government that since it has happened in the past, it will continue to happen in the present too,” quipped Justice Mazahar Ali Naqvi.

CJ Bandial said influential persons benefitted from the amendments and added that if someone thought that the case against them was not strong, they should approach the courts. Justice Bandial, however, appreciated PM Shehbaz and his son Hamza appearing in person for bail. He, however, added that the court would peruse the bail order.

Justice Ahsan asked if the cabinet approved the changes to the ECL rules. The government’s lawyer responded that the issue was under consideration by the cabinet committee concerned with legislation.

The additional attorney-general said the attorney general of Pakistan office held a meeting with all stakeholders after the SC order regarding the ECL. During the meeting, the observations and questions made by the court were discussed.

“Where are the minutes of the meeting,” Justice Mazahar asked. The minutes will be available in a few days, the lawyer responded. He further said that SOPs regarding amendments in ECL rules have been forwarded to all departments.

He said the authorities would look at cases of individuals whose names were removed from the ECL and added that the rules would be made after consultations with the National Accountability Bureau and Federal Investigation Agency.

Justice Bandial asked how could someone, who will be the beneficiary in the case, engage in an amendment of the rules.

Subsequently, the top court directed that the people whose names were on the ECL would need to approach the interior ministry if they wanted to go abroad. The additional attorney assured that the court’s interim order would be complied with till legislation regarding the ECL rules is completed.

Justice Bandial said the SC wanted the supremacy of law and rules should not be compromised for the government members facing cases in courts.