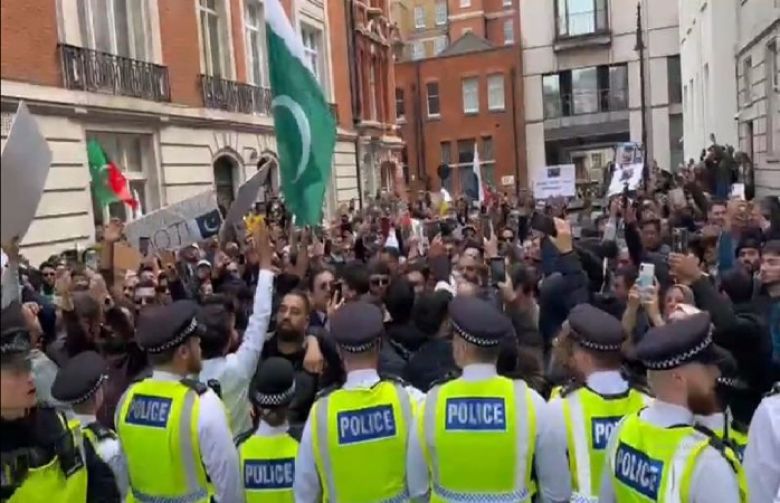 The supporters of PTI and PML-N staged counter protests on Sunday at Avenfield Flats on Park Lane and outside Jemima Goldsmith’s house in Richmond.

The PTI UK said that it was holding a protest against the “imported government” and for “early elections” and “PML-N said it had called for the protest in retaliation to PTI’s routine of gathering outside the residence of families of Sharif family members.

At the Richmond protest, a garden party was arranged by the Goldsmith family for the local residents on Sunday. Visitors looked bemused and surprised when they were met with loud music and bhangra dance when they arrived to attend the party; three visitors clashed with the protesters asking them to stop playing loud music. Heavy police presence remained on the scene till the end of the protest after about two hours.

The PTI's protest started from Hyde Park where supporters of Imran Khan gathered and marched towards Avenfield flats, a five-minute walk. They protested outside the flats for about two hours and were then asked by the police to end it.

Protesters on both sides chanted raised harsh slogans and condemned each other for "bringing militancy and abusive culture to politics". Both sides vowed to continue protesting against each other until their demands are met: PTI said it wants removal of the PDM coalition government and PML-N said it will return to Jemima Goldsmith’s house if PTI continued staging protests outside Avenfield flats.

Jemima Goldsmith had previously expressed her annoyance over the protest outside her mother Annabel Goldsmith’s house and said she had nothing to do with Pakistani politics.

PTI and PML-N workers have come face to face several times since the ouster of former PM Imran Khan in a vote of no-confidence around six weeks ago, after he lost the majority in the National Assembly. His supporters have taken to the streets to demand fresh elections, saying he was ousted in a conspiracy led by the United States.