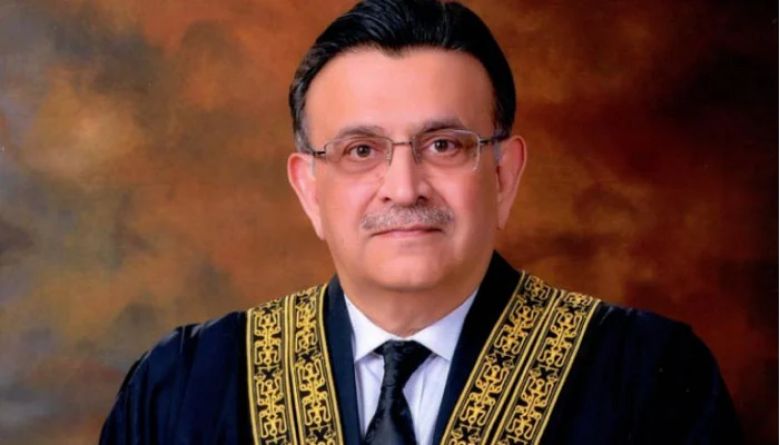 The chief justice took suo moto notice of the ruling against the deputy speaker of the National Assembly after consulting 12 judges of the Supreme Court, Chief Justice of Pakistan (CJP) Umar Ata Bandial said Monday.

The 12 judges agreed that the speaker’s ruling was a “constitutional matter”, the CJP stated during a hearing of the presidential reference seeking an interpretation of Article 63(A) of the Constitution, which concerns the disqualification of lawmakers.

In today’s hearing, Makhdoom Ali Khan, the lawyer representing PML-N, was to present his arguments, however, he was not in the country.

When the court was informed of Khan’s absence by an assistant lawyer, the chief justice said that the bench did not want to delay the matter any further. The court was then told that the PML-N lawyer will return on May 15.

Chief Justice Bandial also inquired whether the new attorney general of Pakistan (AGP) will be coming to the court, but he was told that a few things were pending before his official appointment, after which he will assist the court.

While the additional attorney general, who was present in the courtroom, said that he wanted to bring to the court’s notice that the issue of the disgruntled PTI lawmakers was already being heard by the Election Commission of Pakistan (ECP), and that the matter will be decided within 30 days.

The CJP said that he was aware of this development, and the court did not have the time to hear the case of each and every defected member of the PTI.

He further added the court plans to interpret Article 63(A) for the future generations of the country.

In March, President Arif Alvi has sought the opinion of the Supreme Court after it emerged that members of the PTI will be siding with the Opposition in the vote of no confidence against ex-prime minister Imran Khan.

In the petition, the president had asked the court if members, who cross party lines, should be disqualified for life.

In Monday’s hearing, the chief justice told PTI’s counsel, Babar Awan, that regardless of how much the courts are criticised, the judges will keep defending the Constitution. Awan replied that he respected the courts. In response to this, Justice Jamal Khan Mandokhail remarked that he wished that this respect would be spread amongst the public as well.

“Tell the people that courts open at night too,” the justice added, “The Balochistan High Court once opened at 1:30 am.”

A lawyer of the PML-Q then approached the court and said that there were rumours the government might take back the presidential reference after the new attorney general is notified. The chief justice responded that he hoped the new government will realise the importance of the reference and not interfere in its interpretation.