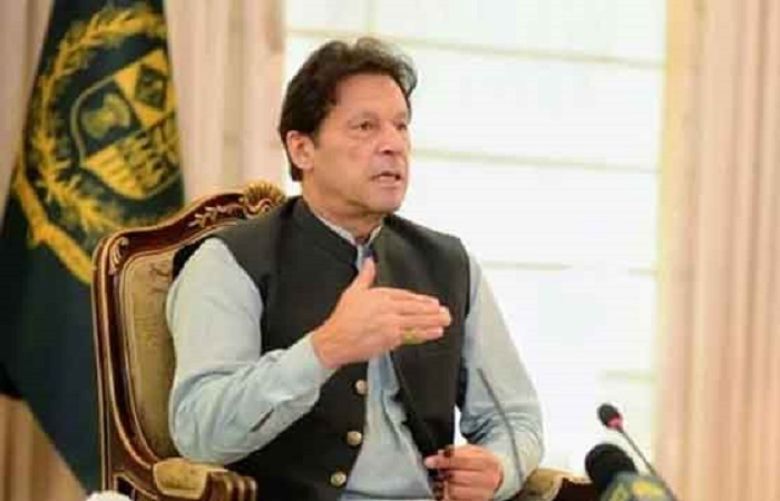 PTI Chairman and former prime minister Imran Khan on Wednesday claimed that his opponents have hired companies which are "preparing material" for his character assassination.

During an interview, the actor asked the cricketer-turned-politician about marketing companies being used in politics and fifth-generation warfare.

His remarks also come as PTI-linked social media accounts have warned supporters of the dangers of "deepfakes", videos which use a form of artificial intelligence called deep learning to create life-like but fake videos of people.

"I had to face mafias, the biggest of which is the Sharif mafia [...] they always attack on a personal level because are indulging in corruption for the past 35 years. When someone [points out] their corruption, they attack a person's character," Imran said.

Continuing after a short commercial break, the former premier said that the Sharifs had made preparations to launch a character assassination drive against him after Eid.

"Now that Eid is over, you will see they are fully prepared for my character assassination. They have hired companies that are readying the material," the former premier said.

He added that 60 per cent of the federal cabinet was out on bail. "The father (Shehbaz) is on bail and so is the son (Hamza). Maryam is also out on bail and Nawaz Sharif has been convicted [while] his sons have fled abroad. So what [other] defence will they have?"

He said that in a democracy, they were required to give an answer for the allegations levelled against them. "You can't come up in any democracy if you are out on bail; you can't get any position."

The PTI chairman claimed that instead of giving an answer for the billions of rupees they had stolen, the Sharifs would now focus on his character assassination.

"What was Jemima's crime? She was my wife [...] now they have found Farah [Khan]. Farah's crime is that she is a close associate of Bushra begum (his wife)," he said.

He went on to say that the Sharifs had also made further preparations and "made tapes" similar to the ones of former chief justice of Pakistan Saqib Nisar and late Judge Arshad Malik.

"This is mafia style. I only want the nation to understand that if you want to smear anyone's name, there are companies that can help you to achieve this."

He added that the PTI had announced its long march to Islamabad by the end of May due to which the Sharifs wanted to lower his respect in the eyes of the public and assassinate his character.

"But they have been doing this before too. This is not something new."