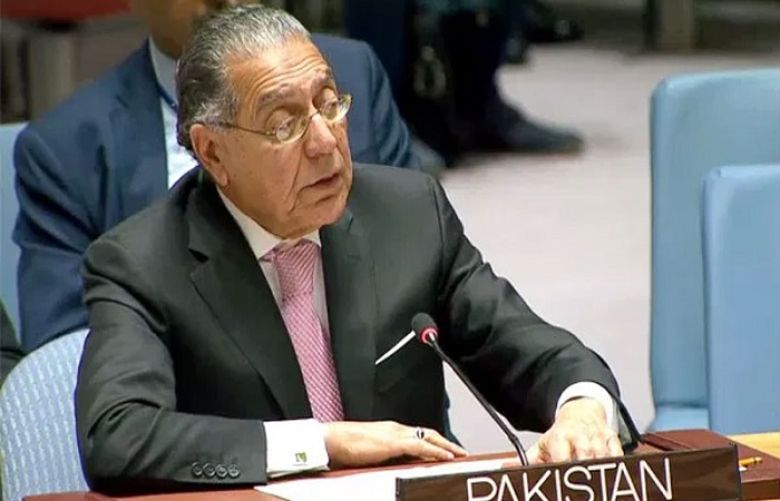 Pakistan, speaking on behalf of the Group of 77 — a coalition of 134 developing countries and China — has called on the United Nations Department of Global Communications (DGC) to fight the proliferating "fake news" and disinformation on social media platforms, and pay greater attention to the promotion of sustained economic growth and sustainable development in the coronavirus and conflict-hit countries.

“The United Nations remains the indispensable foundation of a peaceful and just world — its messages must be heard in a clear and effective manner,” Pakistan's Permanent Representative to the UN, Ambassador Munir Akram told the Committee on Information, a subsidiary body of the UN General Assembly, on Tuesday.

Describing the Committee as vital in that regard, he said that following the challenges of the last two years, many countries now face the serious threats of food, energy and supply chain disruption.

Pakistan is the current chairman of G-77 and China, which now has 134 members and is the United Nations’ biggest intergovernmental group of emerging countries.

In his remarks, Ambassador Akram said the world at large faces severe stress due to proliferating conflicts, a new arms race, rising xenophobia and hate speech, violence and disinformation. He noted that against that backdrop, the Department has worked relatively well.

The Pakistani envoy emphasised that the growing trend of “fake news” and disinformation on online platforms demands that the Department intensify its support for efforts across the United Nations system to fight disinformation while disseminating factual, clear, accessible, multilingual and science-based information. It must also pay greater attention to the promotion of sustained economic growth and sustainable development, in accordance with relevant resolutions and commitments, he said.

The Group of 77 is deeply concerned about digital disparities emerging as a new form of inequality between and among States, he said. “The international community, led by the United Nations, should take the necessary steps in rectifying the imbalances.”

Ambassador Akram called for efforts to leverage digital technologies to enable socio-economic development and facilitate more effective and efficient governance as well as delivery of public services, saying the Department remains well-positioned to bridge the gap between the developed and developing countries in the crucial field of public information and communications.

He went on to underline that multilingualism and cultural diversity are cardinal values of multilateralism, enshrined in the UN Charter.

In that regard, the Pakistani envoy encouraged the Department to mobilise adequate resources to promote multilingualism and maximise its outreach at the grassroots level, including by exploring innovative financing options and voluntary contributions.

While welcoming the Department’s promotional campaigns and the work of United Nations information centres, he urged it to further strengthen partnerships with new and traditional media around the world.

Opening the debate, Melissa Fleming, UN under-secretary-general for global information, said that her department was spearheading robust efforts to stem the tide of disinformation, counter-attacks on human rights and tell the human stories on the front lines of conflict.

Fleming said that, since her last briefing to the Committee in 2021, inequalities have widened across the globe, the climate crisis is worse and war is now raging in Ukraine. That conflict is sending shock waves around the world, driving food, energy and commodity prices to historic highs, while fueling hunger and possibly unrest, she added.

Meanwhile, the coronavirus pandemic is still not over — particularly for the one-third of the world’s population that has not received a single dose of the vaccine — she emphasised, while warning that the mis-disinformation that proliferated during the pandemic is still rising in social media news feeds, threatening truth and posing an existential risk to humanity.

Stressing the serious repercussions of all those interlinked crises, Fleming said the principles underpinning the Charter of the United Nations are “under the greatest strain” since the Organization’s founding.

Against that backdrop, the Department is advocating for multilateralism and driving a communications response that is strategic, coordinated, audience-based and impact-focused.

Spotlighting some of those initiatives, Fleming said the Department aligns United Nations communications through “cells” to speak in one voice, and with agility, on issues ranging from the climate crisis to Russia’s invasion of Ukraine. Since the start of that conflict, the Department has worked around the clock from New York, Ukraine and across the region, she added.