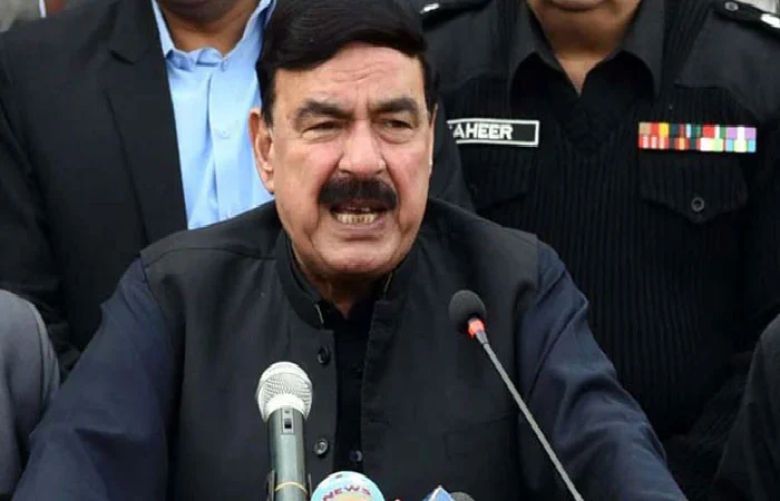 Former interior minister Sheikh Rasheed Ahmed claimed Sunday that PML-N leaders are planning to kill him, while they are also trying to attack Imran Khan's planned long march to Islamabad.

Speaking during a press conference in Islamabad, Rasheed said that his life is in danger because the Sharif family and other PML-N leaders want to get rid of him.

"I have registered a case against seven people at the secretariat police station as my life is in danger," he said. "I have also written a letter to the top five institutions of Pakistan in which I have stated that if anything happens to me, then these seven individuals, including Nawaz Sharif, Shehbaz Sharif, Hamza Shehbaz, and Rana Sanaullah, must be questioned."

The former interior minister said that as soon as PML-N came to power, they removed the names of a hundred people from the Exit Control List (ECL).

"I request the army to scrutinise the list of people who have been removed from the ECL".

He said that the PML-N, soon after forming a government, started transferring all those people who had initiated investigations against them.

"They are coming up with fake cases against [PTI] members which are putting a burden on the judiciary," he said. "Now it's upon the court to serve justice."

Rasheed then criticised Minister for Interior Rana Sanaullah and said that "this man will push this country into a civil war, therefore, he should be stopped."

"How could they make this lunatic person the interior minister of the country," Rasheed questioned. "This man only wants bloodshed."

Speaking about the unfortunate incident that took place at the Masjid-e-Nawabi (PBUH) in Media — where a group of people chanted slogans against Prime Minister Shehbaz Sharif, Information Minister Marriyum Aurangzeb, and Minister for Narcotics Control Shahzain Bugti — Rasheed said that the incident was regrettable.

Speaking about leaders of other parties, Rasheed said that "Shehbaz Shareef resorted to his flagrant bootlicking of the army 14 times, while Asif Zardari is responsible for spreading corruption in Punjab.

Answering a question about his nephew Rashid Shafiq, who has been arrested at the Islamabad airport upon his arrival from Saudi Arabia in connection with the incident of slogan chanting at Masjid-e-Nabawi, Rasheed said that it is "good" that he has been thrown in jail.

"I am not begging for his bail," the former minister said, adding that it would be good for Rashid Shafiq to stay behind bars for 15 days as it will be his first time in prison."